It’s been our longest time between trips to New Zealand ever – over 5 years (aaaack!!). We are now here for Jeff’s month-long “sabbatical,” where we’ve decided to take a 3-week campervan trip in the South Island, bookended by 3-4 days in Christchurch to see family and friends.

To remind you – Jeff and I met, fell in love, and got married in Christchurch – about 15 years ago. It will always hold a special place in our hearts.

Since then, Christchurch has changed – the normal, sometimes subtle, evolution you’d expect over 15 years, but also, and most obviously, due to the multiple earthquakes it has sustained during that time. The most destructive of which was on February 22, 2011.

The 7th anniversary is rapidly approaching and the city is still recovering.

This is the second time we’ve returned to Christchurch since the earthquakes. We blogged about our first trip back, in late 2012, when there was little to do but peer through a chain link fence that surrounded the centre city – to view the destruction from afar.

At that point, it was natural to begin to process the shock, and remember what the city used to look like. I dug through my memories and remembered the city as I knew it before.

This trip is in some ways similar and some ways completely different. Christchurch is still recovering, and is successfully rebuilding the city, piece by piece. You can see how it’s evolving and becoming a new and different version of itself.

Below are some of the changes we noted during our initial 3-day reintroduction to the city.

The earthquake on Feb 22, 2011 measured 6.5 on the Richter scale and damaged the city’s centre, along with outlying areas.

The city’s most iconic landmark and the “heart” of the city – the Cathedral in Cathedral Square – was badly damaged, blocks of the city centre were weakened and/or had to be demolished, and tragically 185 people died on that fateful day. 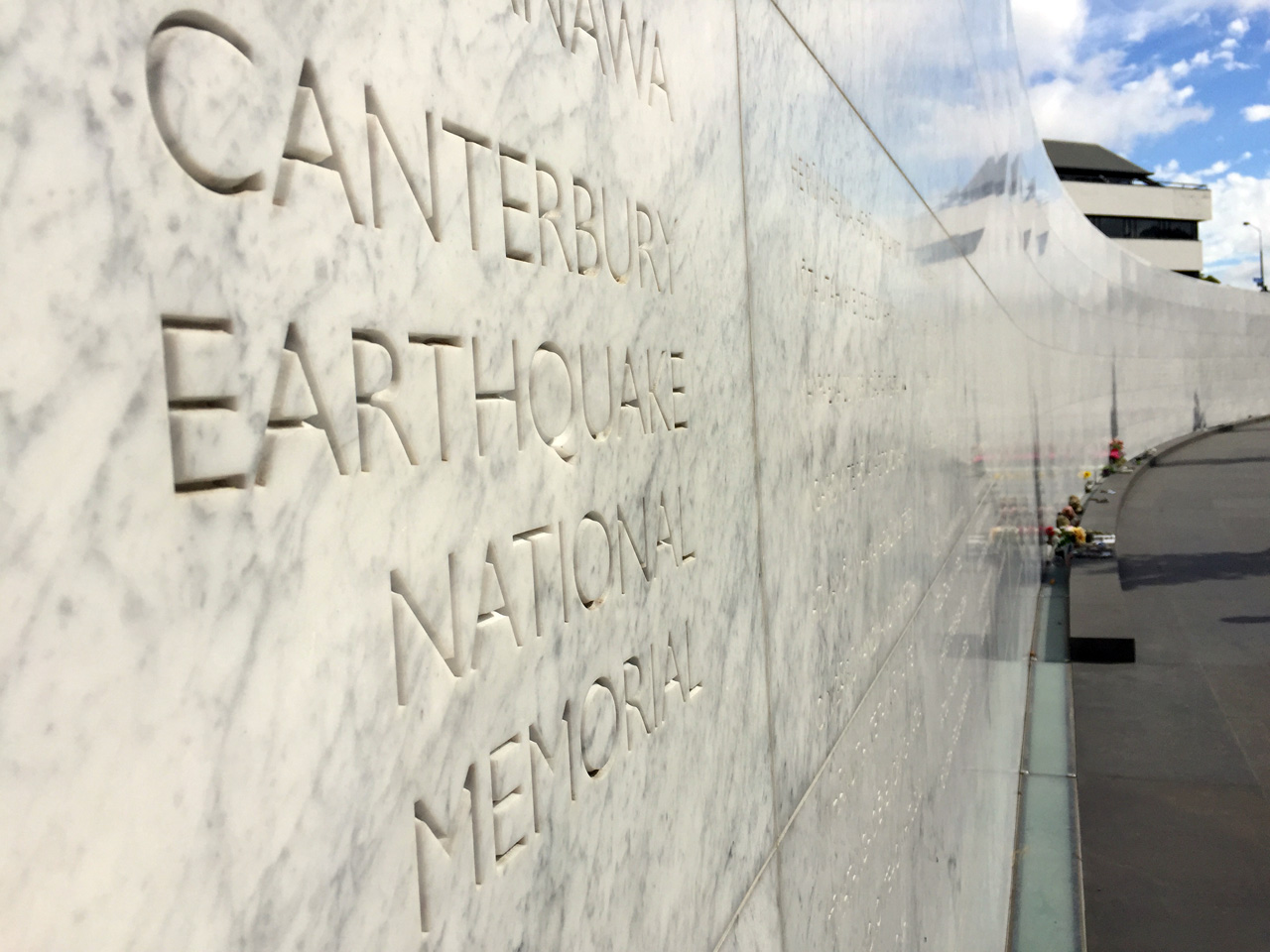 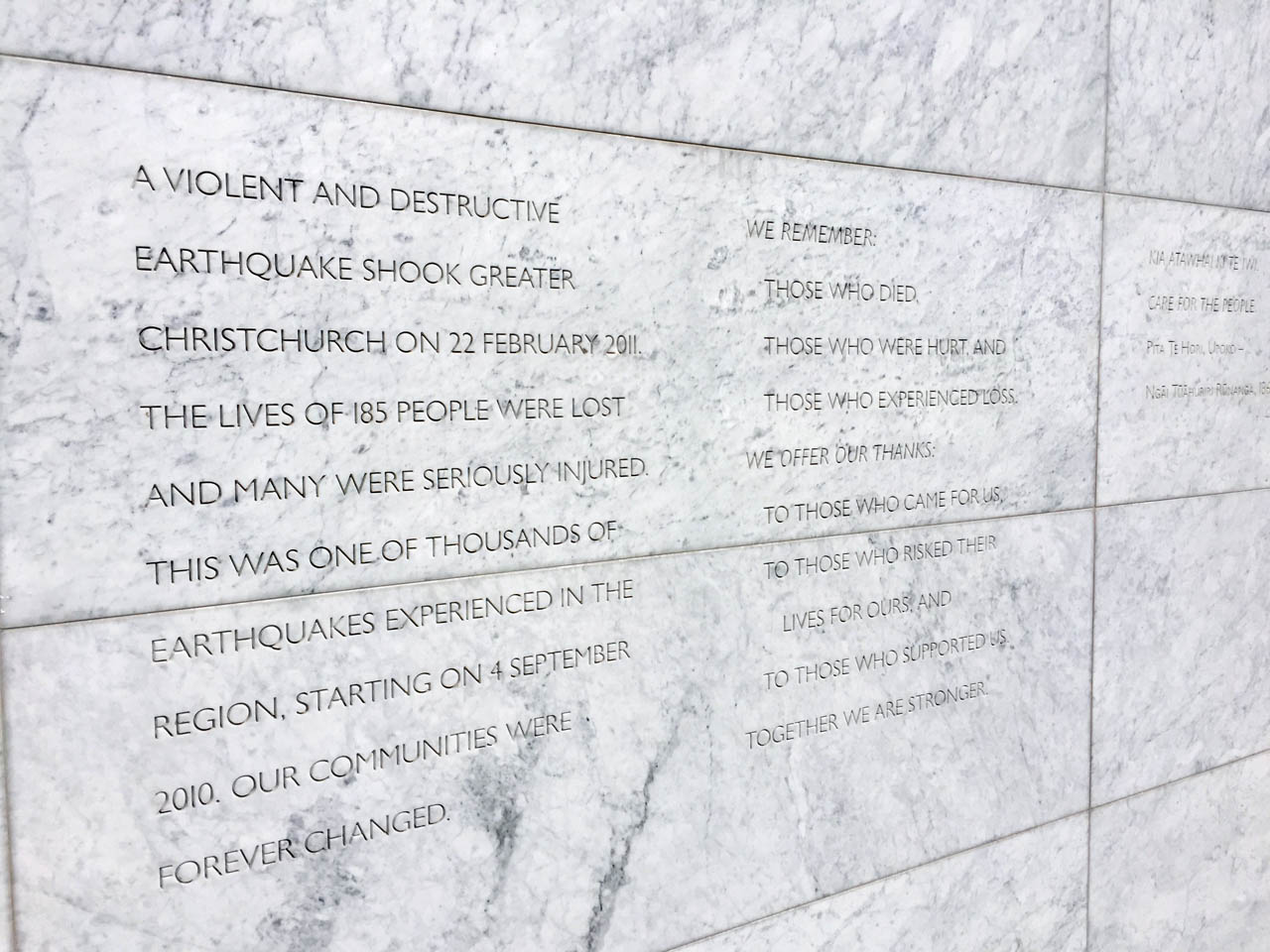 Tribute to earthquake victims, survivors, and those who helped during and after the quake

…and an art installation of 185 empty chairs – one for each person lost. 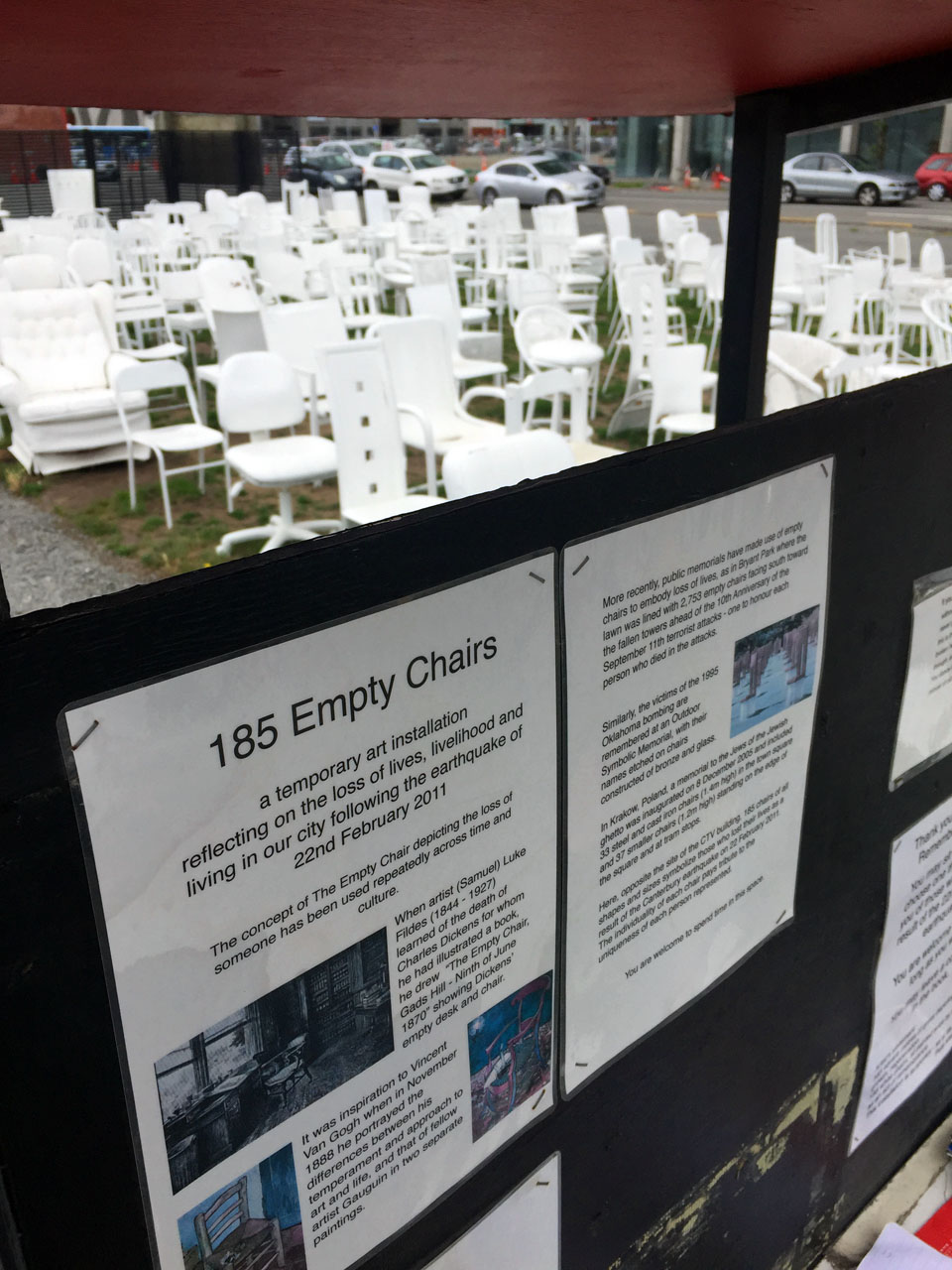 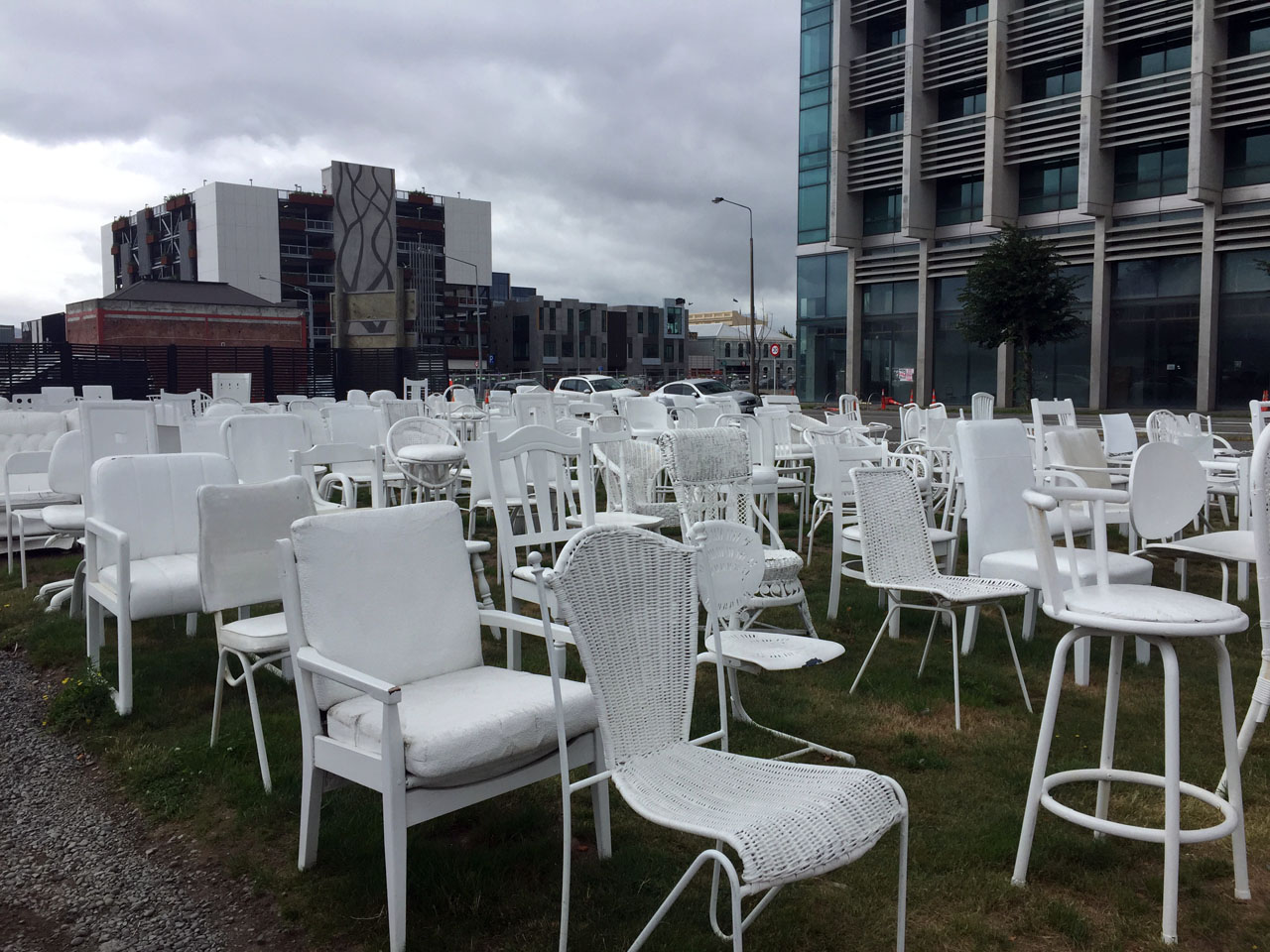 And then there is the heartfelt, handmade tribute to those lost in the CTV building, the building where the most lives were lost. They are currently landscaping that area as a memorial. (Christchurch is “the Garden City”, remember, so their gardens and landscaping are a beautiful tribute.) 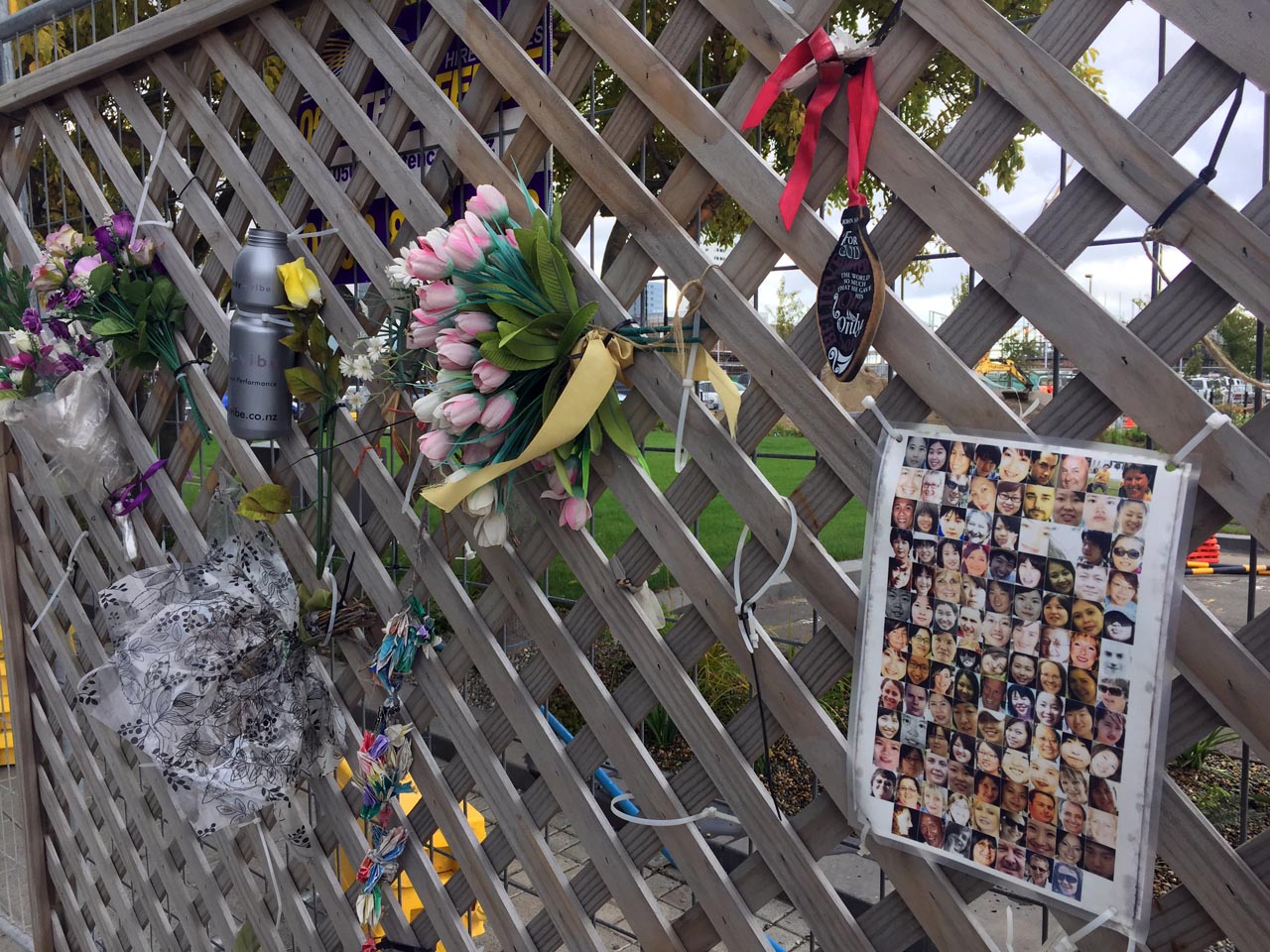 Additionally, to temporarily “replace” the iconic Cathedral, a cardboard “transitional” Cathedral has been erected.

Apparently, temporary structures such as this have been created in other earthquake-damaged cities (eg, Kobe, Japan), so the same architect designed one for Christchurch.

It is the only Cathedral in the world made substantially of cardboard (mainly the tubes, with some local wood, steel, a concrete floor, and a polycarbonate roof added for good measure). 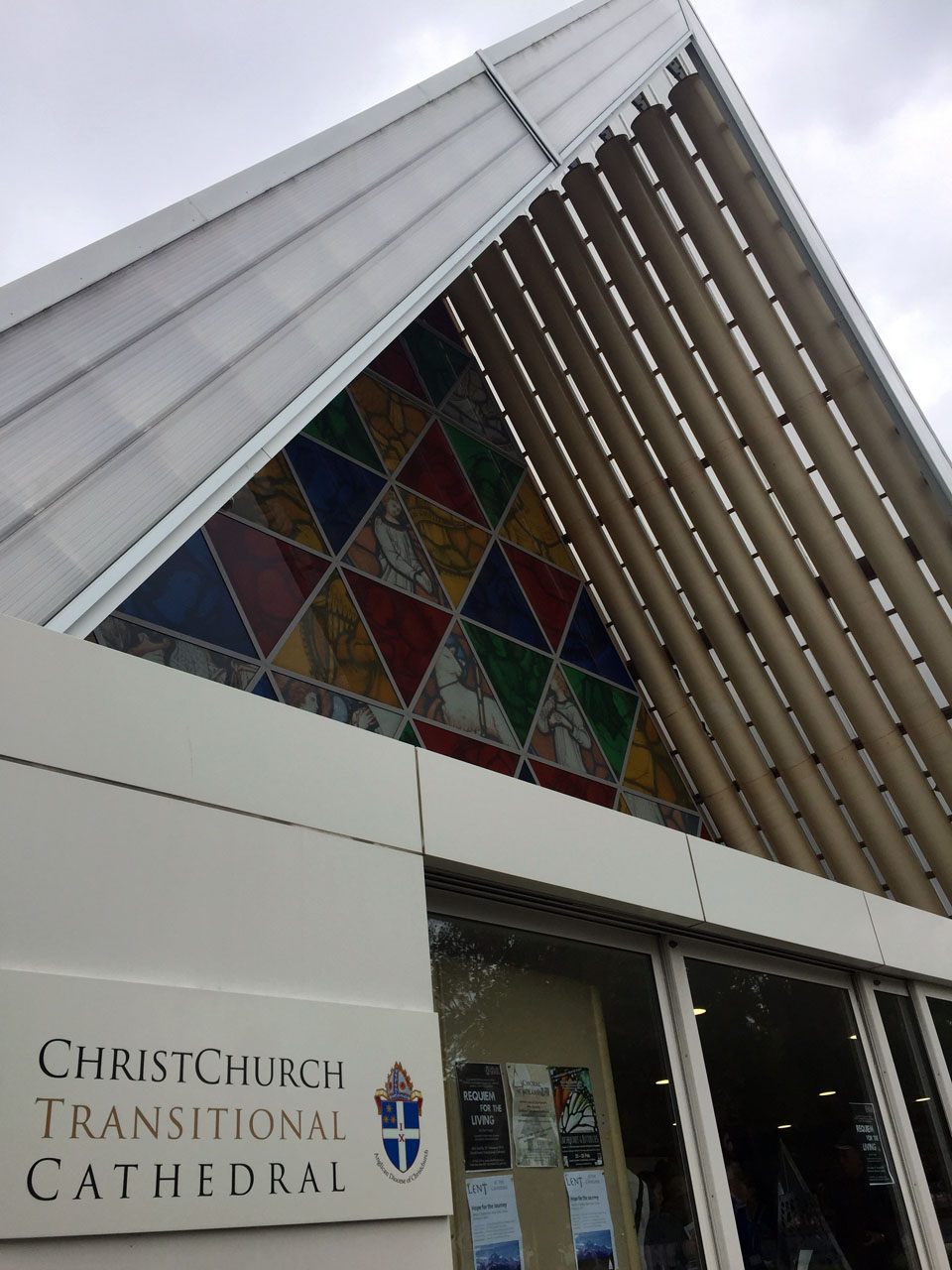 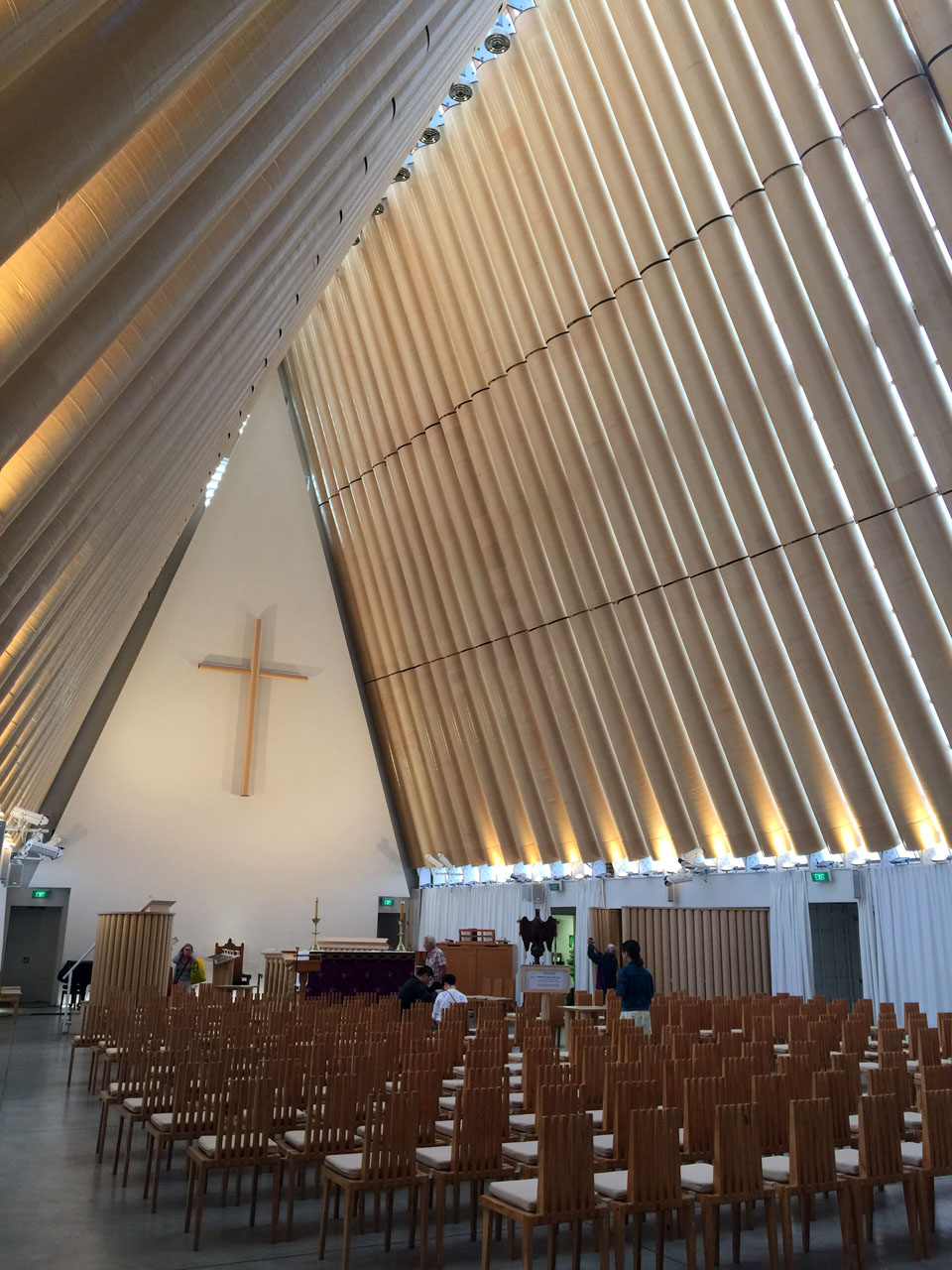 Inside of Cardboard Cathedral

I’m still not sure what I think about this. I can’t tell if it’s a tourism ploy, or a sincere effort to revive a community. Regardless, it is unlike anything I’ve seen before.

Once the real Cathedral is restored, this one will become a parish church for the neighborhood where it is located.

It is not clear when that will happen, though, as the iconic Cathedral is still in a state of disrepair that is disheartening. It will be a joyous, joyous day when the life and energy fully return to Cathedral Square. 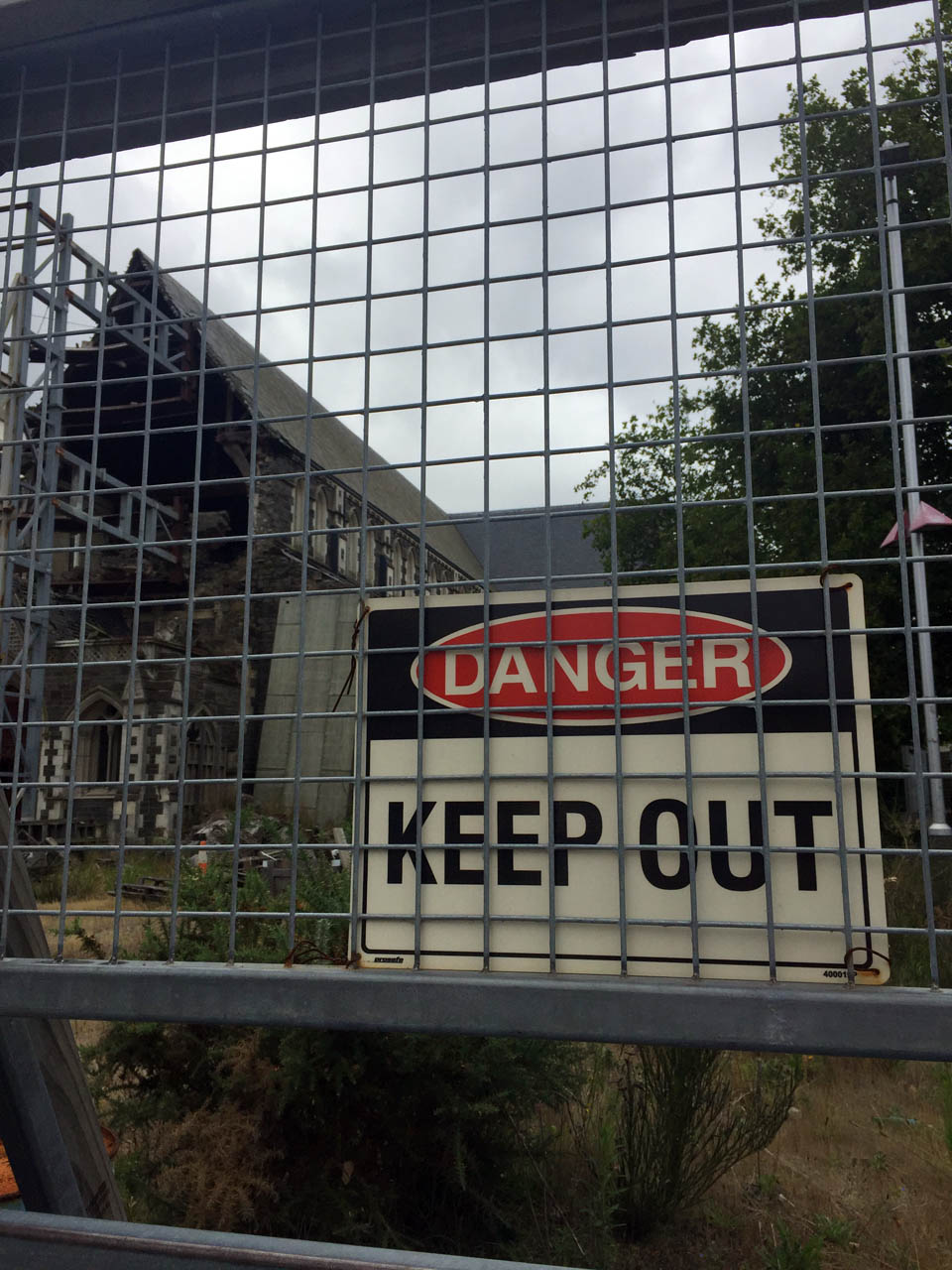 To perhaps alleviate the somber tone of the Cathedral, they have tried to bring some personality back to the area already, with some graphic artwork and fun in the square… 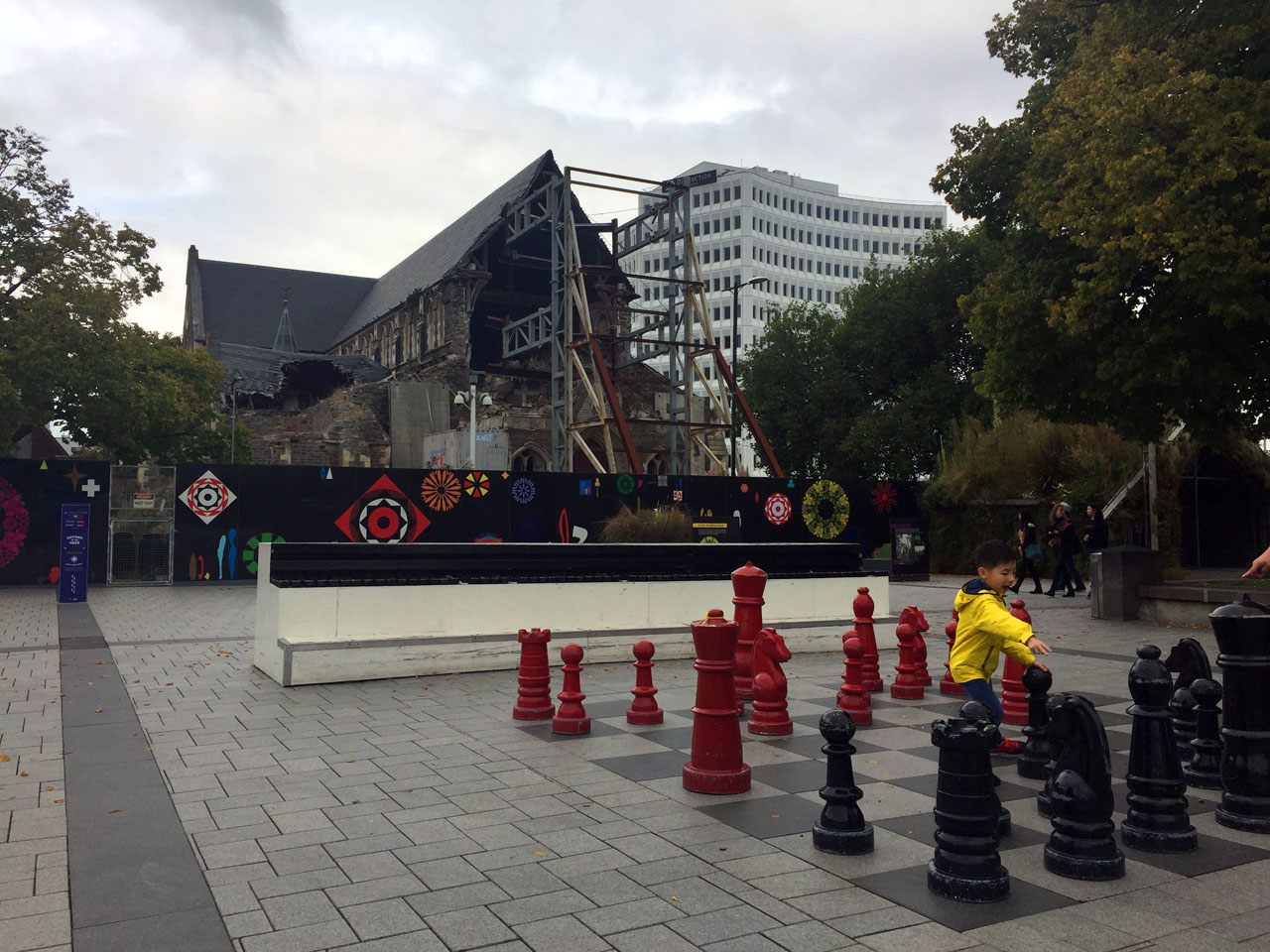 Child having fun playing chess in the Square

Despite this effort, the most notable change for me was the silence. As we walked through the city centre on a Monday afternoon, the openness and quiet were striking.

Regardless of whether you’ve visited Christchurch before or not, we all know what cities sound and feel like. Loud, animated, hurried, atwitter, not to mention tall, narrow, and closed in.

Rather, it was eerie in its quietness, with blocks that used to have bustling stores now either empty, blocked off with construction fences, or replaced with parks and gardens. 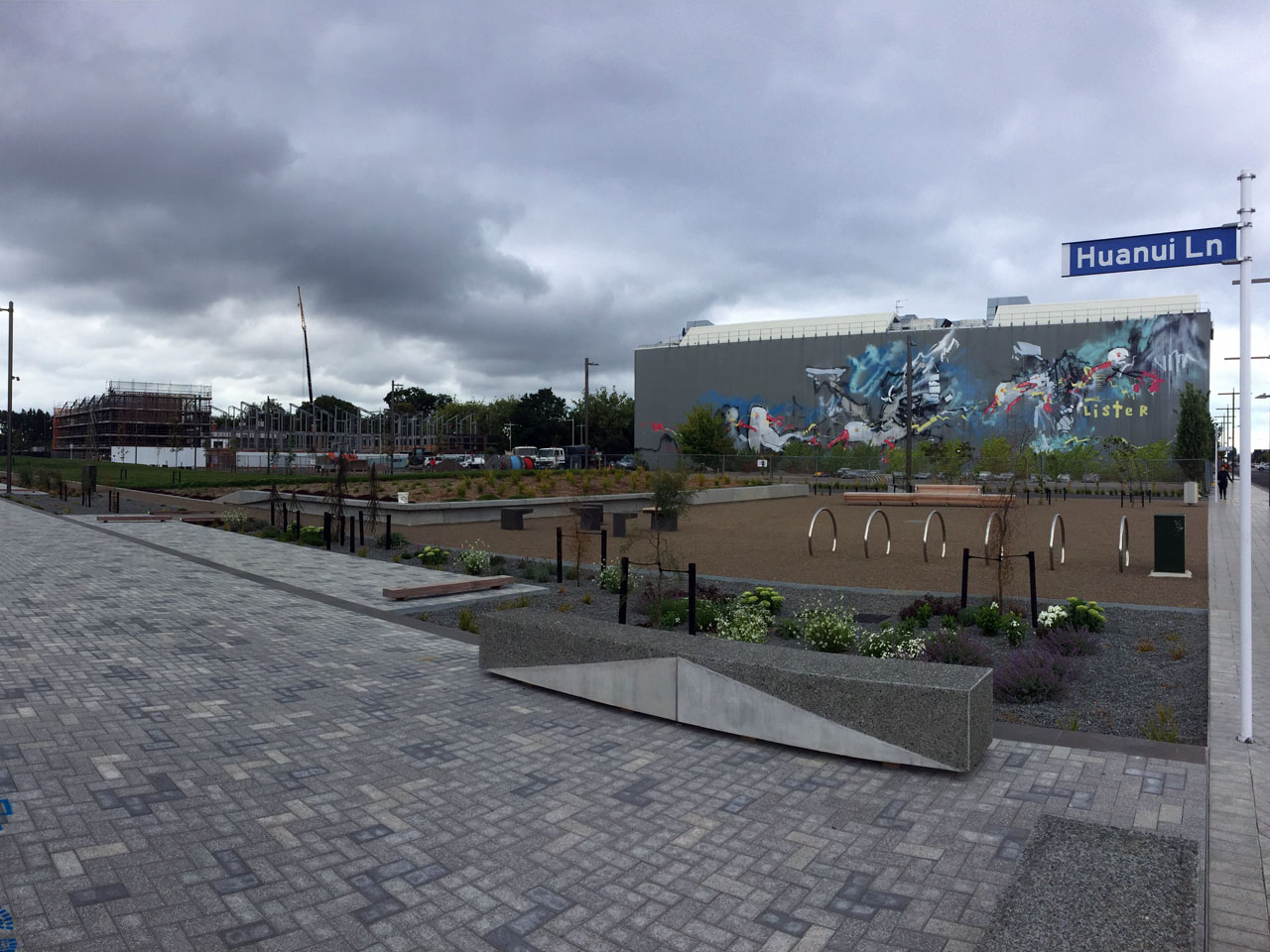 Walkways/park where buildings once stood

The sound made by people walking the city dissipated quickly in the open spaces rather than bouncing off building walls and contributing to the energetic feeling cities normally have.

The below scene is where I noticed it the most (double click on the image to see the full panorama). The area to the right of the picture used to have tall buildings that were filled with activity. Now you can see so, so far instead. It gave me pause, for sure.

The silence due to the missing buildings is palpable

With the openness comes less of the feeling of a city to me. Yet at the very same time, the new buildings that have been erected, and the gradual return of stores to the city centre, is reassuring and wonderfully hopeful.

And then there is the engaging artwork that embodies the city’s spirit (picture above) and openly points to the bright future to come (picture below). (Notably this future is beside a building that is still being reconstructed and among orange construction cones that are mainstays around Christchurch since the earthquakes.) 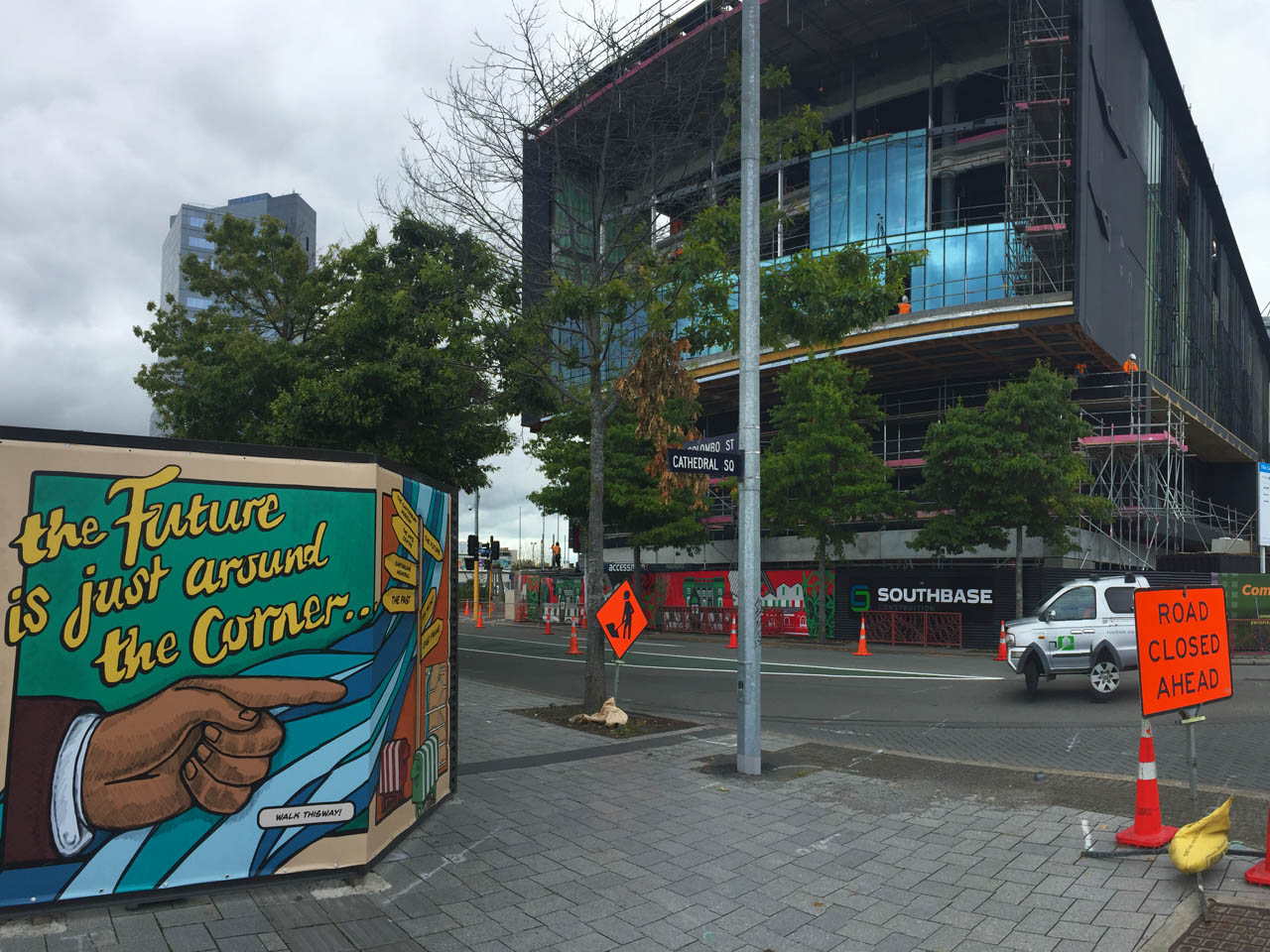 And then there is the praise for the local “superheroes” (ie, all city citizens) who are contributing to that future. 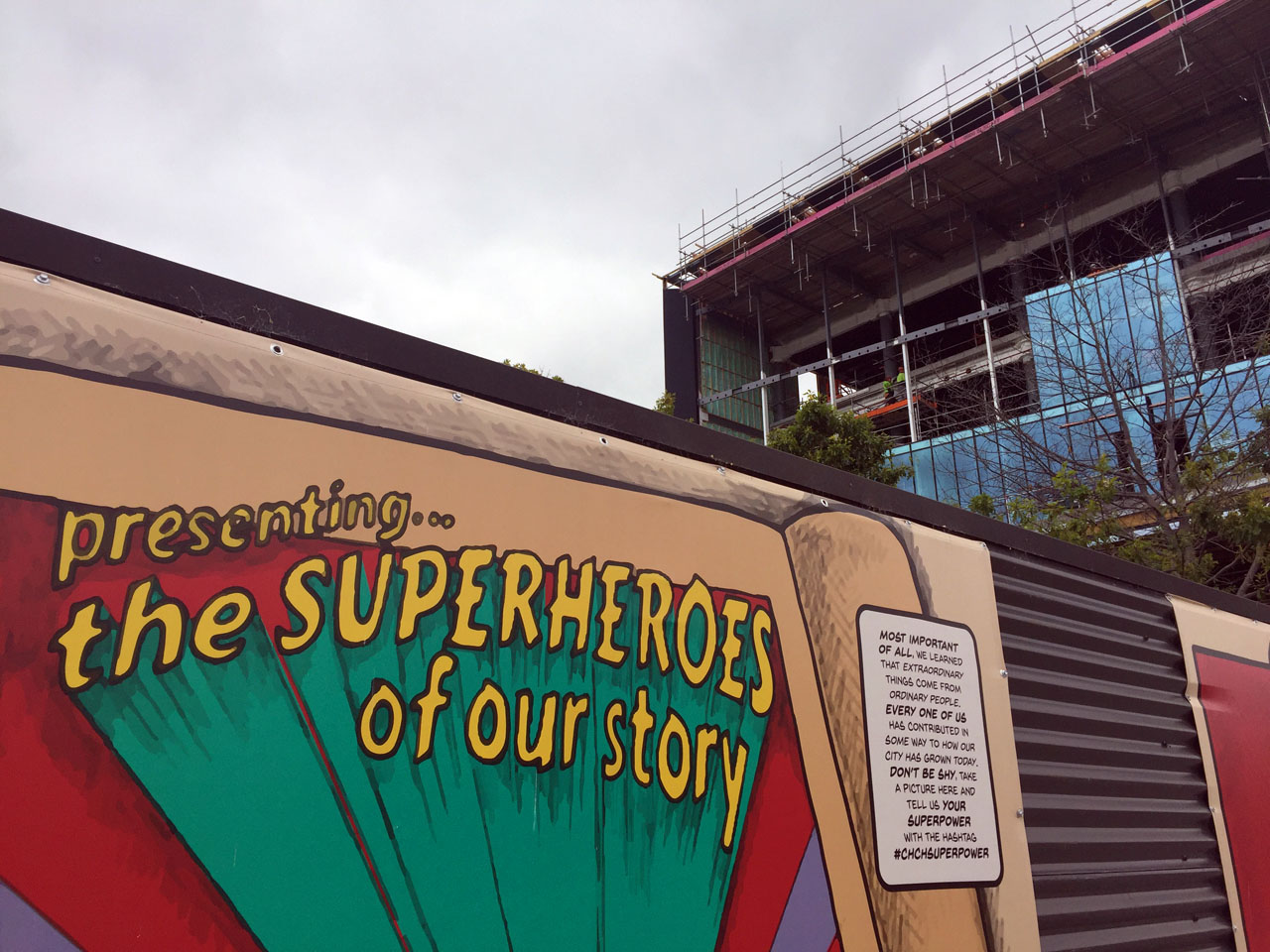 Honestly, I had trouble coming to terms with the two feelings that were stirred inside me – grief and anticipation. While I grieve for the Christchurch of my memories, I’m eager to meet the new Christchurch that emerges.

I can’t wait to meet it, in whatever form it may take.

Ok, so the changes as a result of the earthquake are obvious to spot. But there are more subtle ones that I’d also like to point out, if for no one else but myself…(wink, wink).

For example, the coffee and café culture in Christchurch is booming. The suburbs are thriving, the café’s seem new and cosmopolitan, and you can’t go two steps without running into a coffee shop. Seriously.

And, hallelujah, during our 3 days there, I never saw a Starbucks. Yay, Christchurch!!! 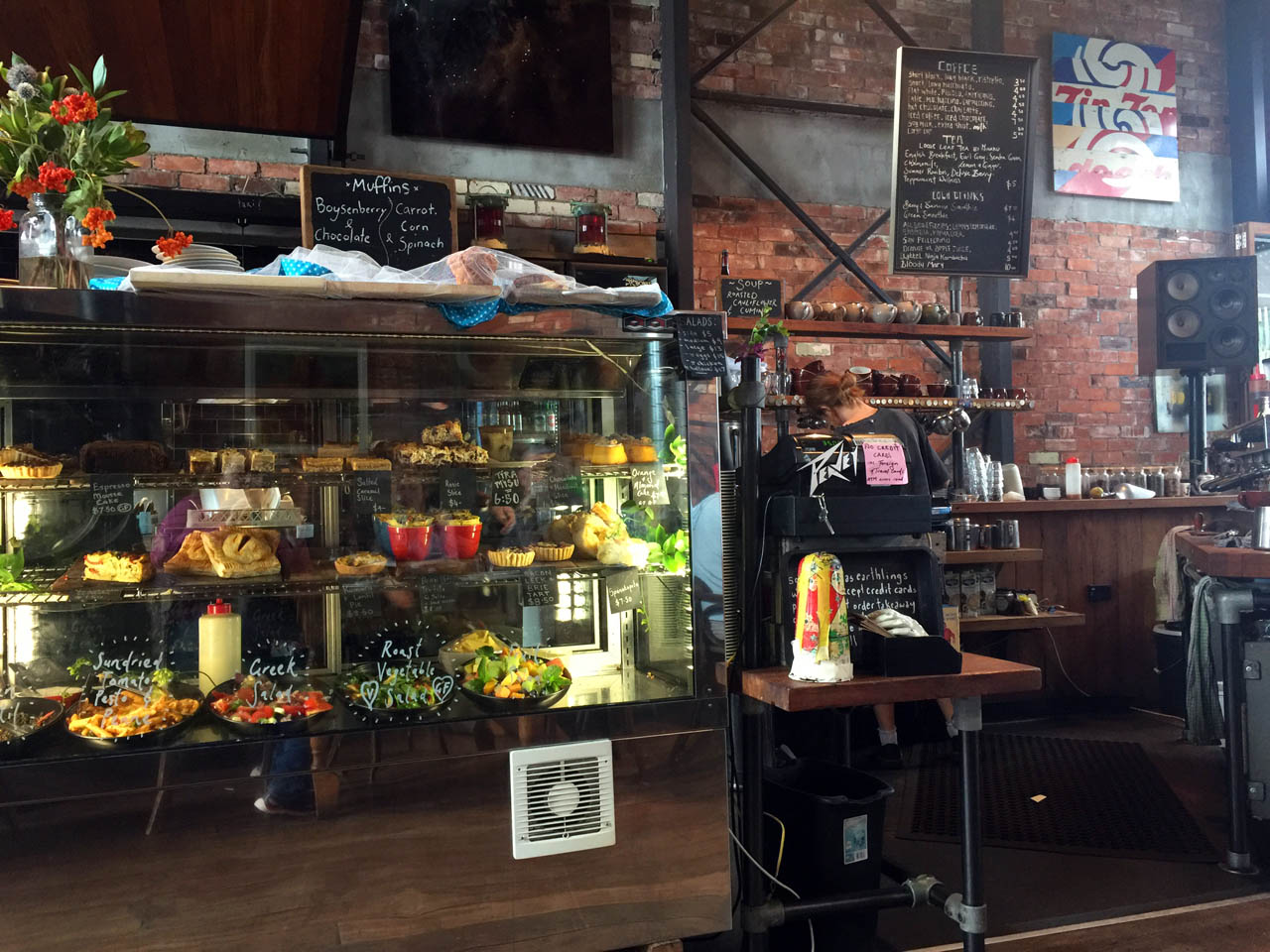 The coffee culture is booming…and the salads and slices are delicious as always!

I must say, though, that the quality of the coffee hasn’t changed, nor has its creative presentation. It was always delicious and beautiful and still is. I think it’s due to the fresh water and milk, but that’s just me. 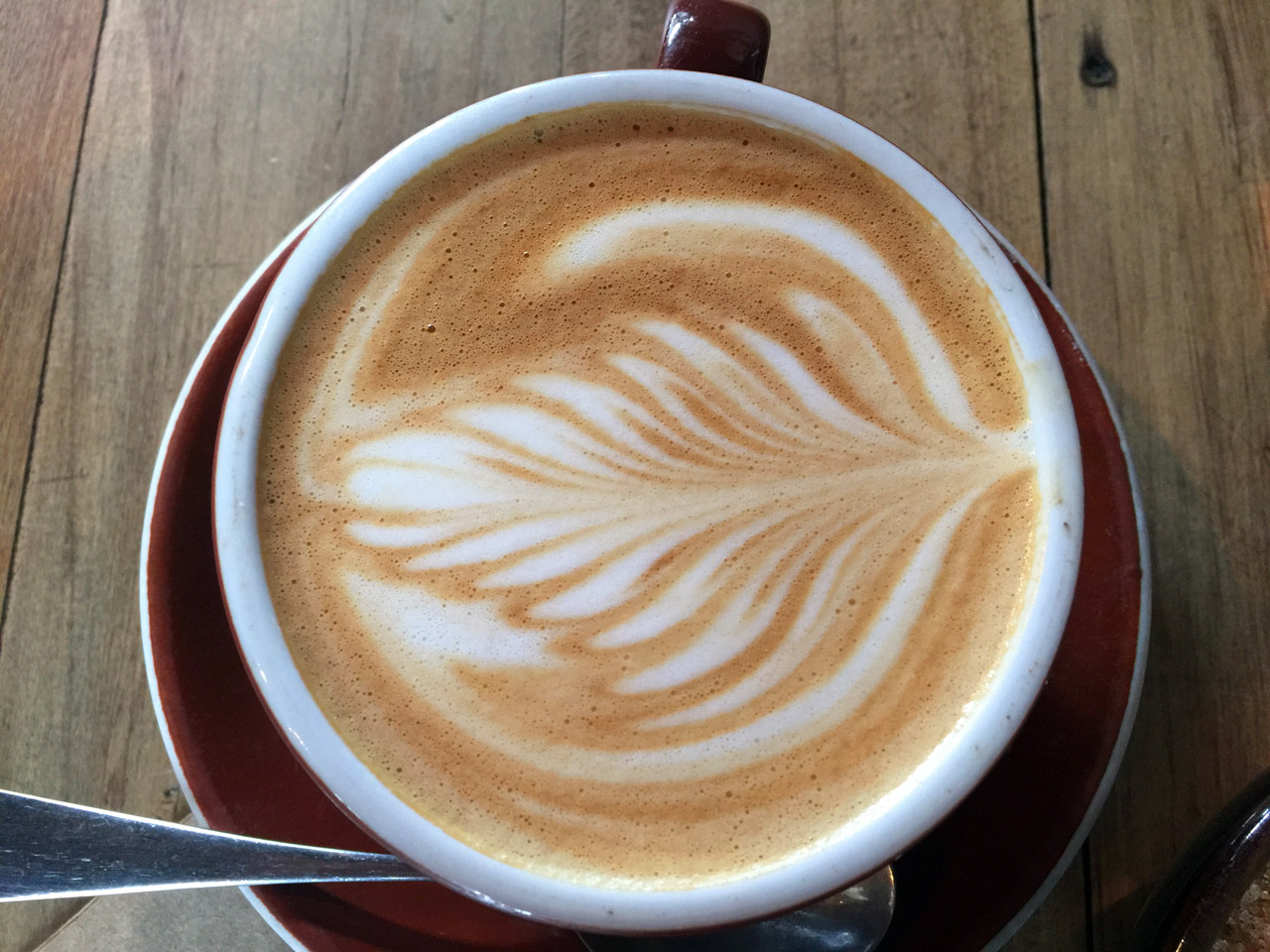 In addition, Mexican restaurants now abound in Christchurch. When I moved there in 2000 – there was no Mexican food to be had. Indian, Thai, Lebanese, and other nationalities, but never Mexican.

And with this new trend, say hello to Old El Paso taco mixes in grocery stores (great for those of us going on 3-week campervan tours…!!)

Heck, when I was here, it didn’t seem like there was much packaged food at all – everything was made from scratch…ask me about some of my adventures trying to cook back then. They are hysterical! (But looking back, I wish it had remained that way!)

Similarly, there is now gluten free, vegetarian, and organic food and produce, as well as whole food shops. 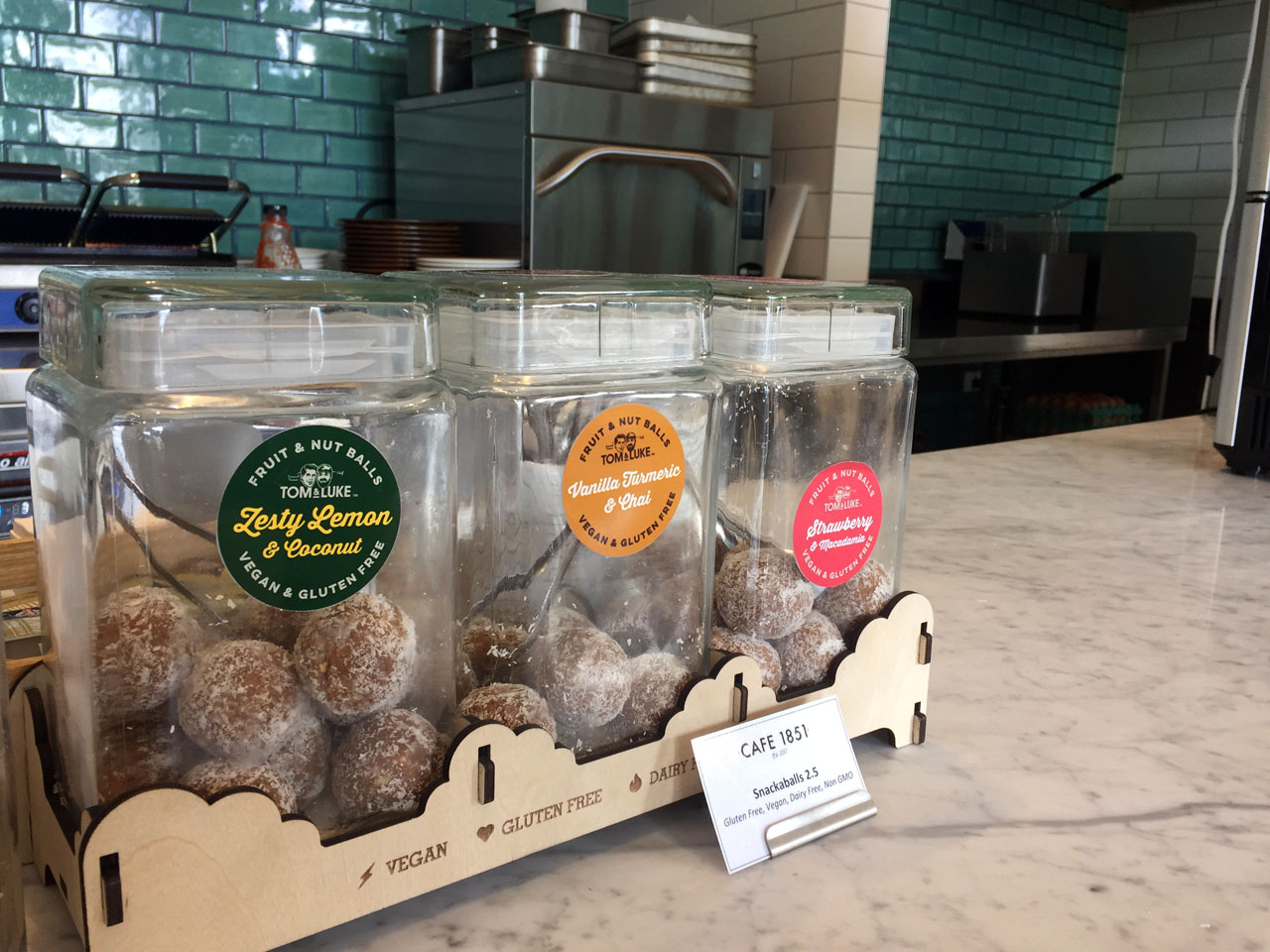 Subtle differences, but differences nonetheless. Those are but a few things I noticed in my first several days back.

To me, it seems like Christchurch has been quite globalized in the past 15 years. With the influx of tourists brought in by the Lord of the Rings fame, New Zealand as a whole has become a tourist destination (and rightly so). But with more tourism comes more outside influence. As long as they don’t lose themselves in the process, I’m good with it.

I hope you’ve enjoyed this re-introduction to Christchurch as it stands in 2018. I can only imagine how it will evolve in years to come.

Also, I can’t end this post without saying a HUGE THANKS to Viv, Lindsay, Rosey, and Simon for letting us stay with them during our time in Christchurch (in their awesome caravan!). And for providing us with heaps of tips for our trip, not to mention camp chairs, an incredibly helpful campervan travel directory, games, and other such helpful travel gear. Thanks guys!

And stay tuned for posts on our upcoming campervan adventure. I have no doubt there will be great pictures and stories to share!