The “Scot” in Nova Scotia: Antigonish and Surrounds

OK – so we’ve been here over a week now and we have a (slightly) better handle on Nova Scotia. As it turns out, the area we stayed in, as well as most of the area we explored in the first week, were all the “most Scottish” part of Nova Scotia.

The below map shows in red/pink the areas where (Canadian) Gaelic, based on Scottish Gaelic, is spoken throughout Nova Scotia (Alba Nuadh on the map). The areas under the word Nuadh are where we spent most of our time – specifically, in the university town of Antigonish and on the Eastern Shore.

(We’ve already told you about our side trip to the other Gaelic speaking area, Cape Breton, in our previous post.) 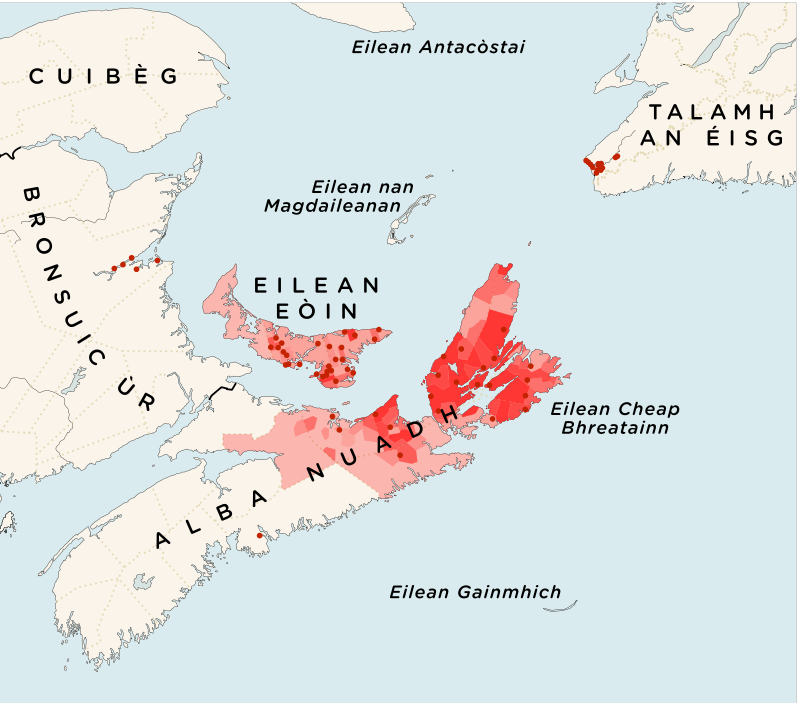 Throughout this whole area, the most obvious indication of the Scottish presence was in the town signage. As we drove into different towns, the town names would be written in English followed by Gaelic. Below is a pretty tame one – some of the Gaelic names would be three times as long as the English version! 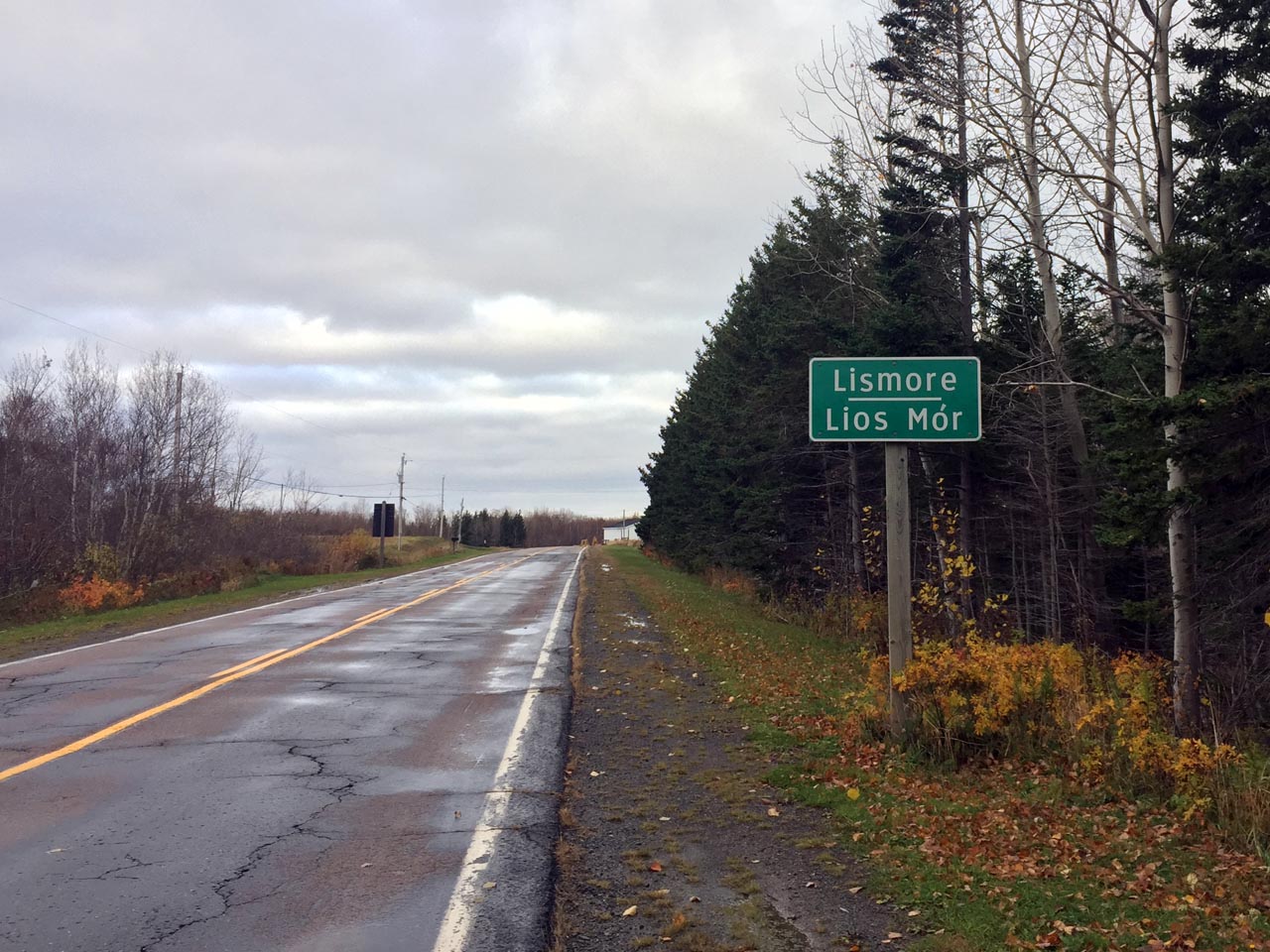 And near our VRBO, there was a tribute to 3 men from Scotland who had survived the battle of Culloden and moved to Nova Scotia. 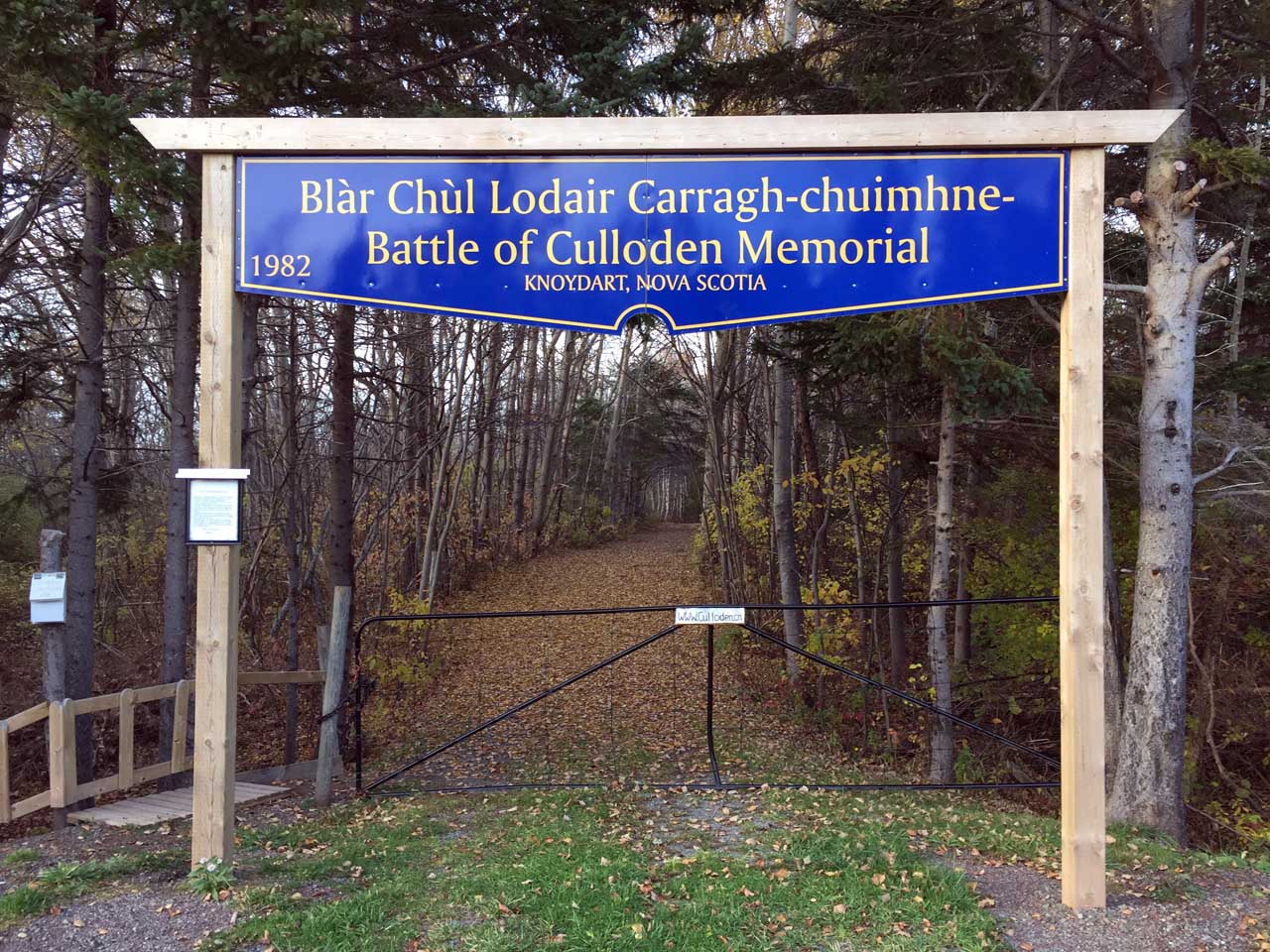 Ok I ‘fess up – the reason this caught my attention is because I “learned” about the battle of Culloden by reading the Outlander Series. There, I admit it. (And…I love that series, too!)

It was the information on this cairn that helped me understand the reason for the Scottish influence in Nova Scotia. The massacre at Culloden in 1746 is what led to many Scots leaving Scotland and taking up residence in New Scotland, ie, Nova Scotia.

But back to this cairn, it was erected in honor of 3 men who survived the battle of Culloden and came to settle in Knoydart, Nova Scotia.

Every April, folks in this area pay tribute to these men, and others like them, who brought their Scottish heritage to Nova Scotia. The cairn was erected in 1938, with a plaque added by the family in 1978. That means this recognition came 200 or more years after the battle.

That struck me. To hold that kind of respect and appreciation over multiple generations is remarkable.

For even more evidence of the Scottish presence in Nova Scotia, we took a quick hop down to nearby Antigonish…

Antigonish is a town of approximately 5,000 people and is home to St. Francis Xavier University. It is a quintessential college town (think main street like Franklin Street in Chapel Hill) that welcomes you to downtown with “a hundred thousand welcomes.” 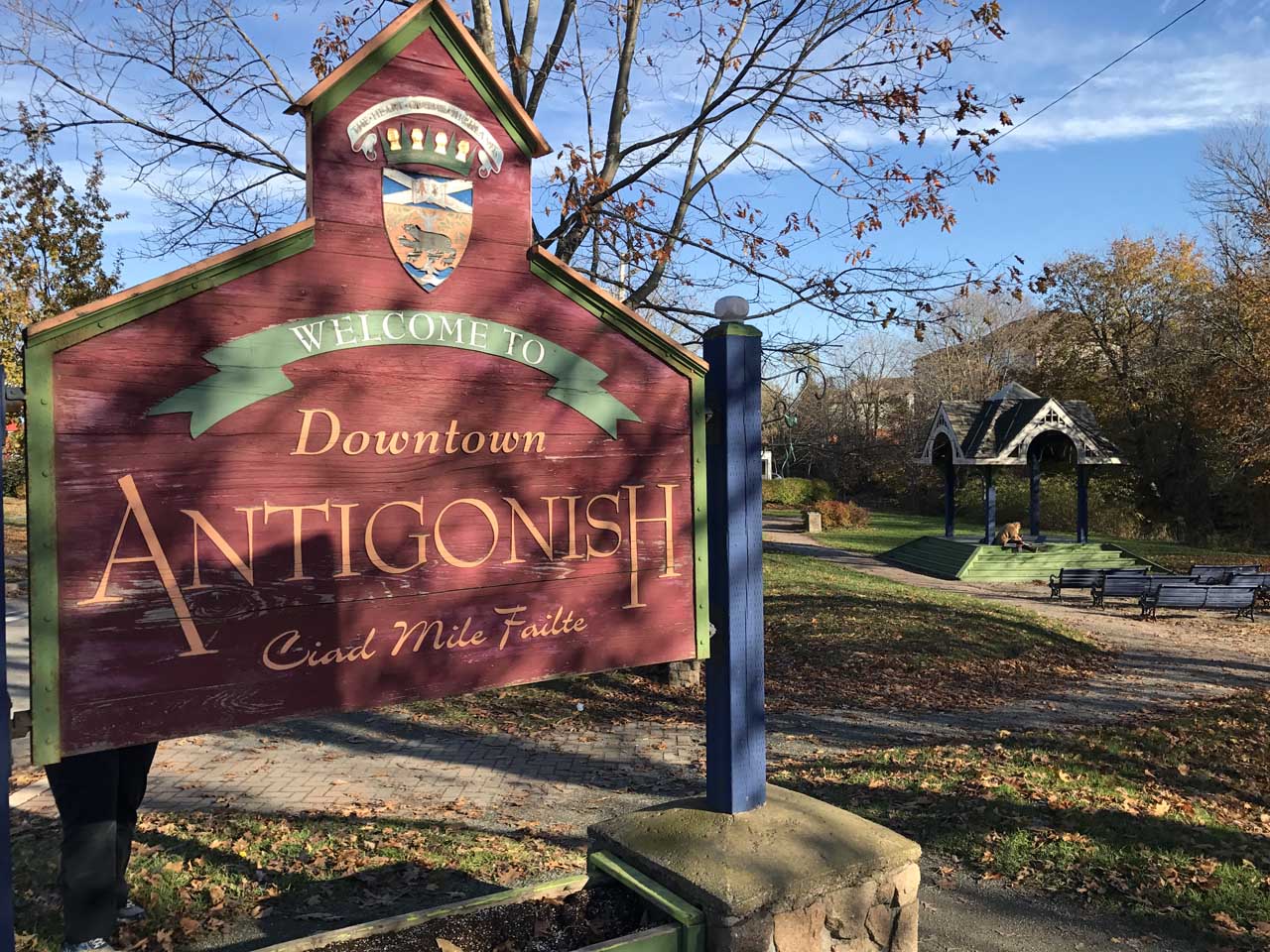 It had quaint murals of a time gone by… 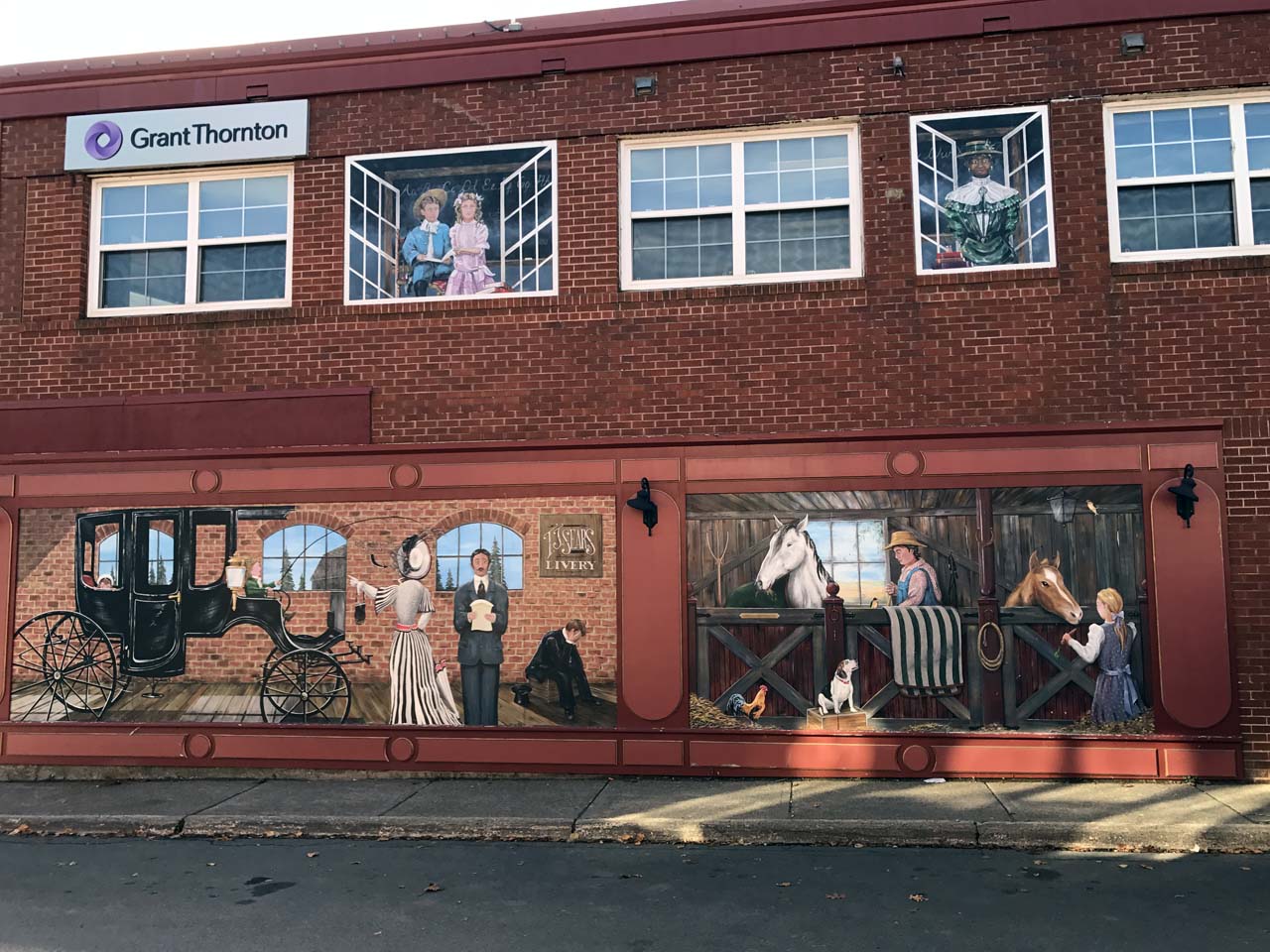 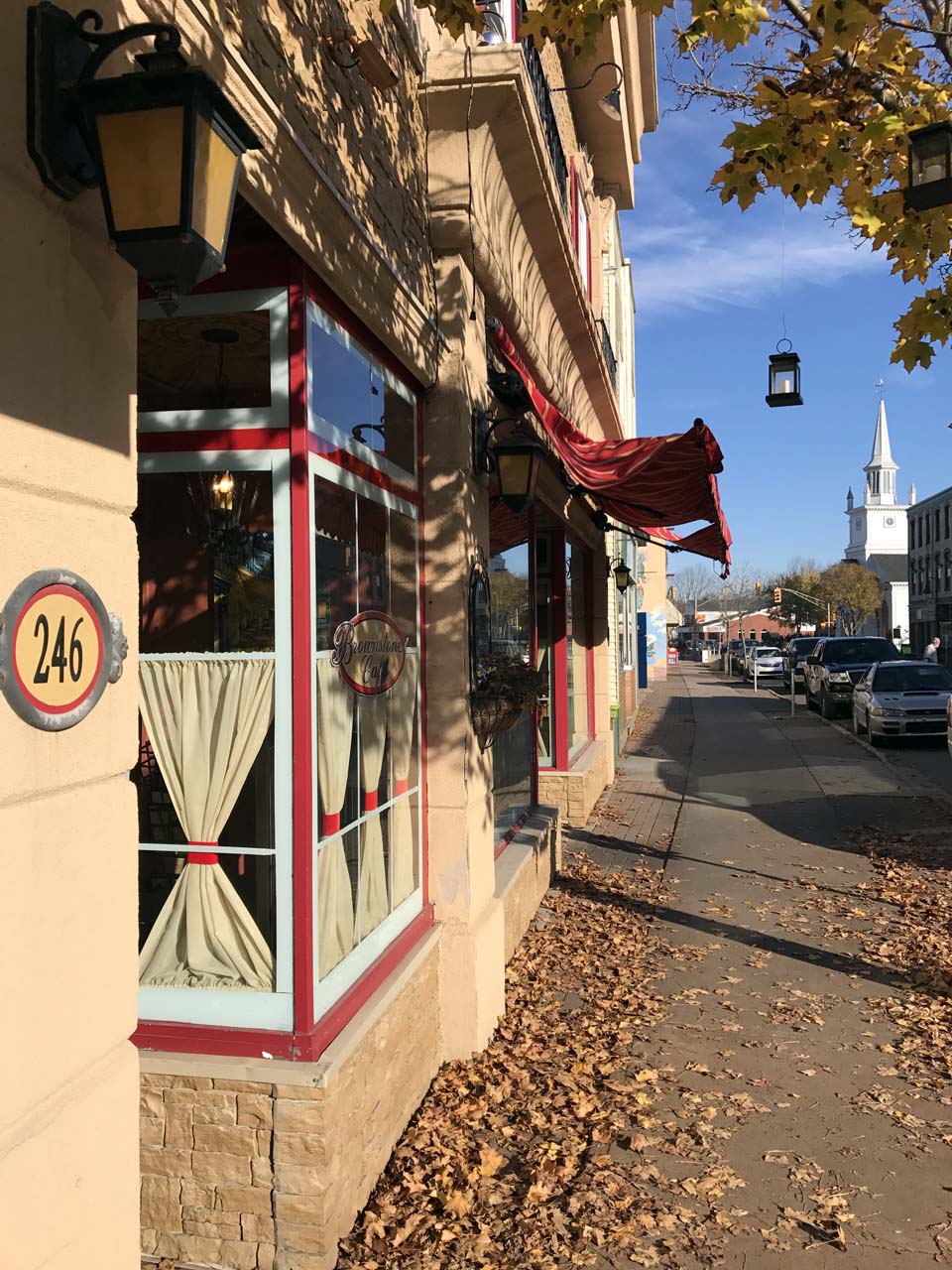 But the most distinguishing feature to me was Cairns Park, where cairns were erected to honor several clans from Scotland that settled in this area. The one below is for the MacLean’s, the left side in Gaelic and the right side in English. 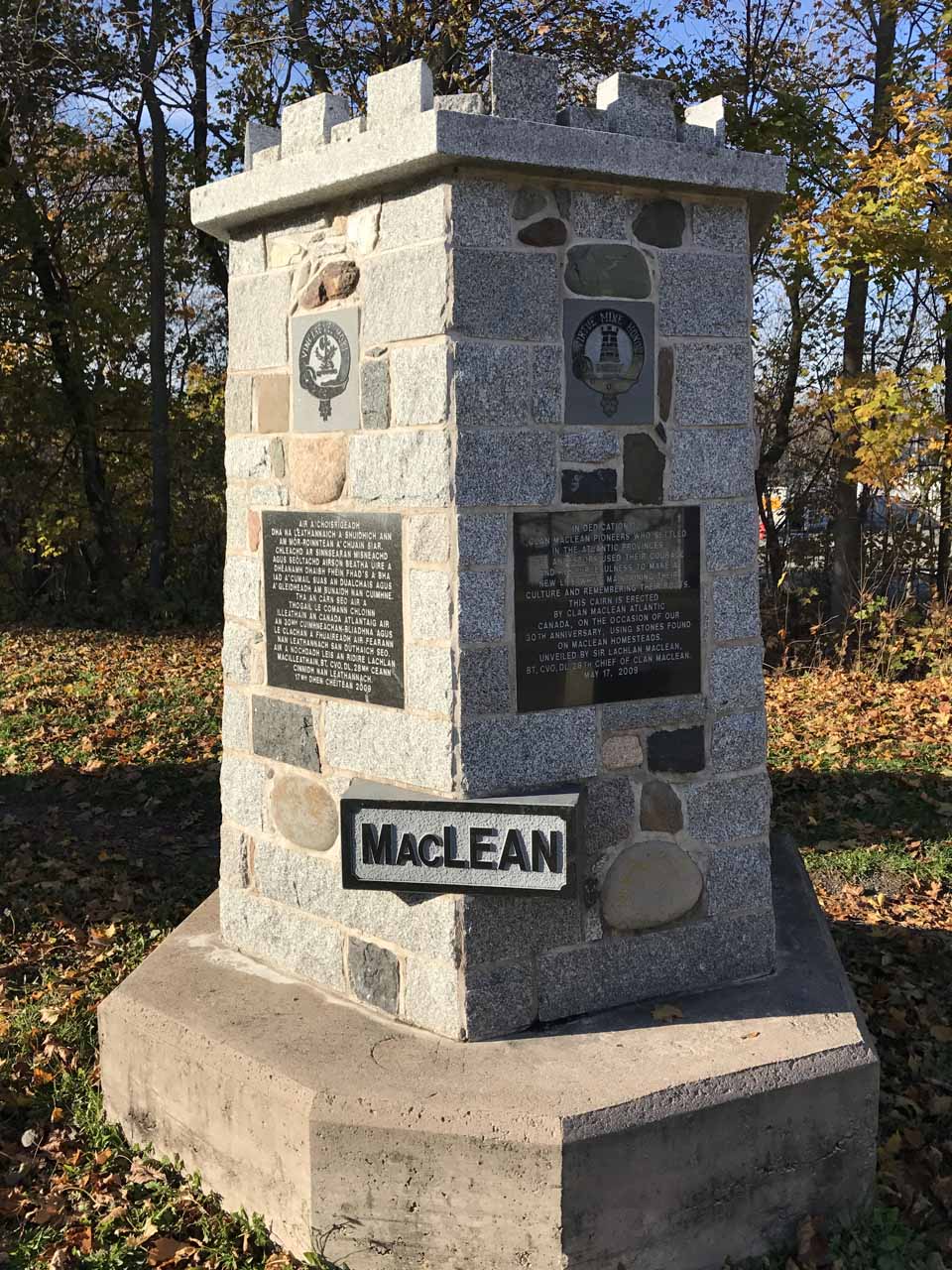 Antigonish is also famous for hosting the annual Highland games – the biggest celebration of Scottish games outside of Scotland. These games have been conducted in Antigonish since 1863.  Think things like: piping, drumming, heavy events (caber toss, anyone?) and Highland dancing, to name a few. I can only imagine how many kilts and bagpipes are there! Such fun!

Outside of Antigonish, the Scottish presence was still felt, but there was also a heavy dose of boats, booze, and lighthouses. We’ll show them to you in that order!

Being a maritime province, we weren’t surprised to see fishing boats. But the sheer number of boats and their presence EVERYWHERE reminded us that fishing is a huge part of this culture and economy.

There were boats in the water… 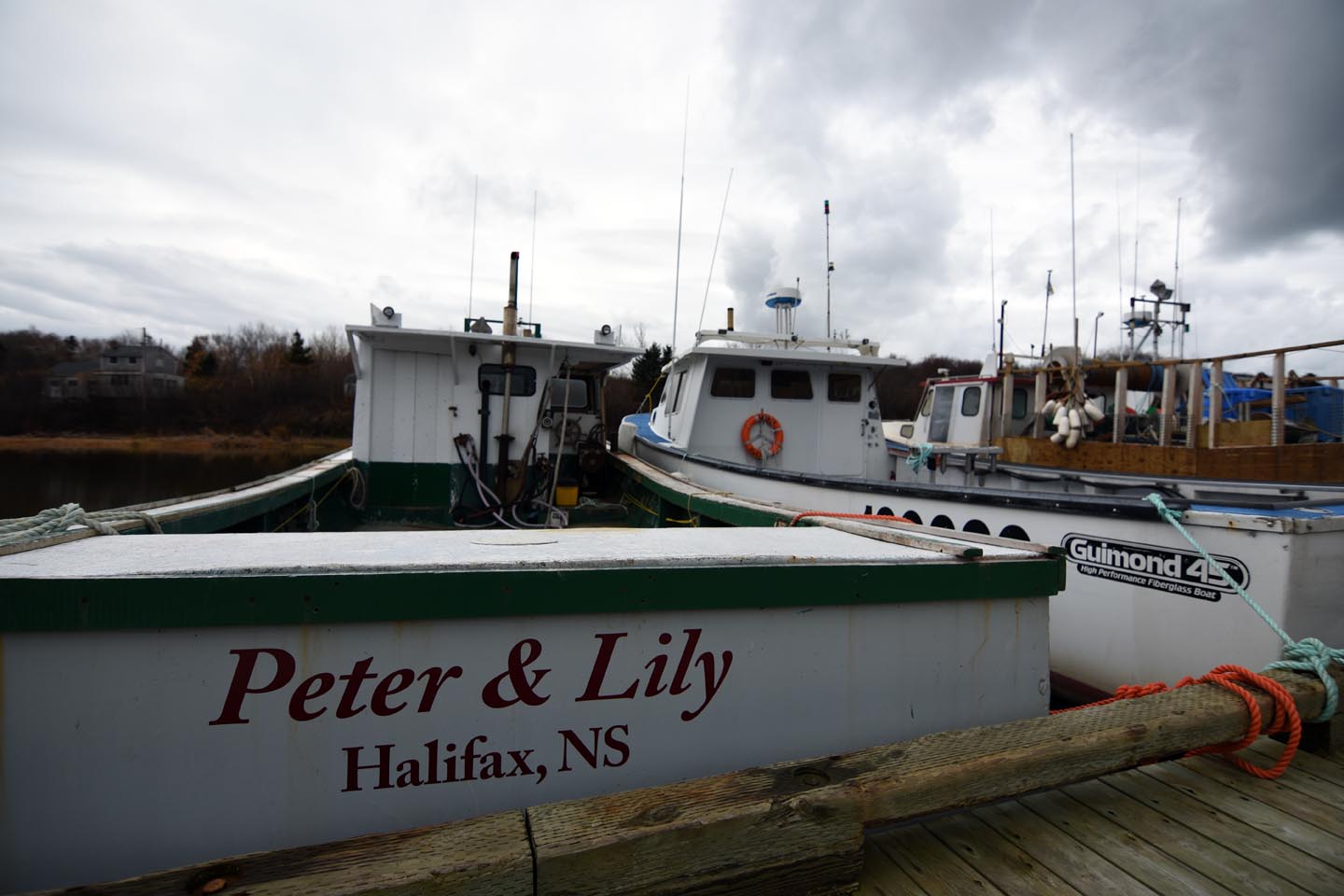 Boats already taken out of the water for the winter… 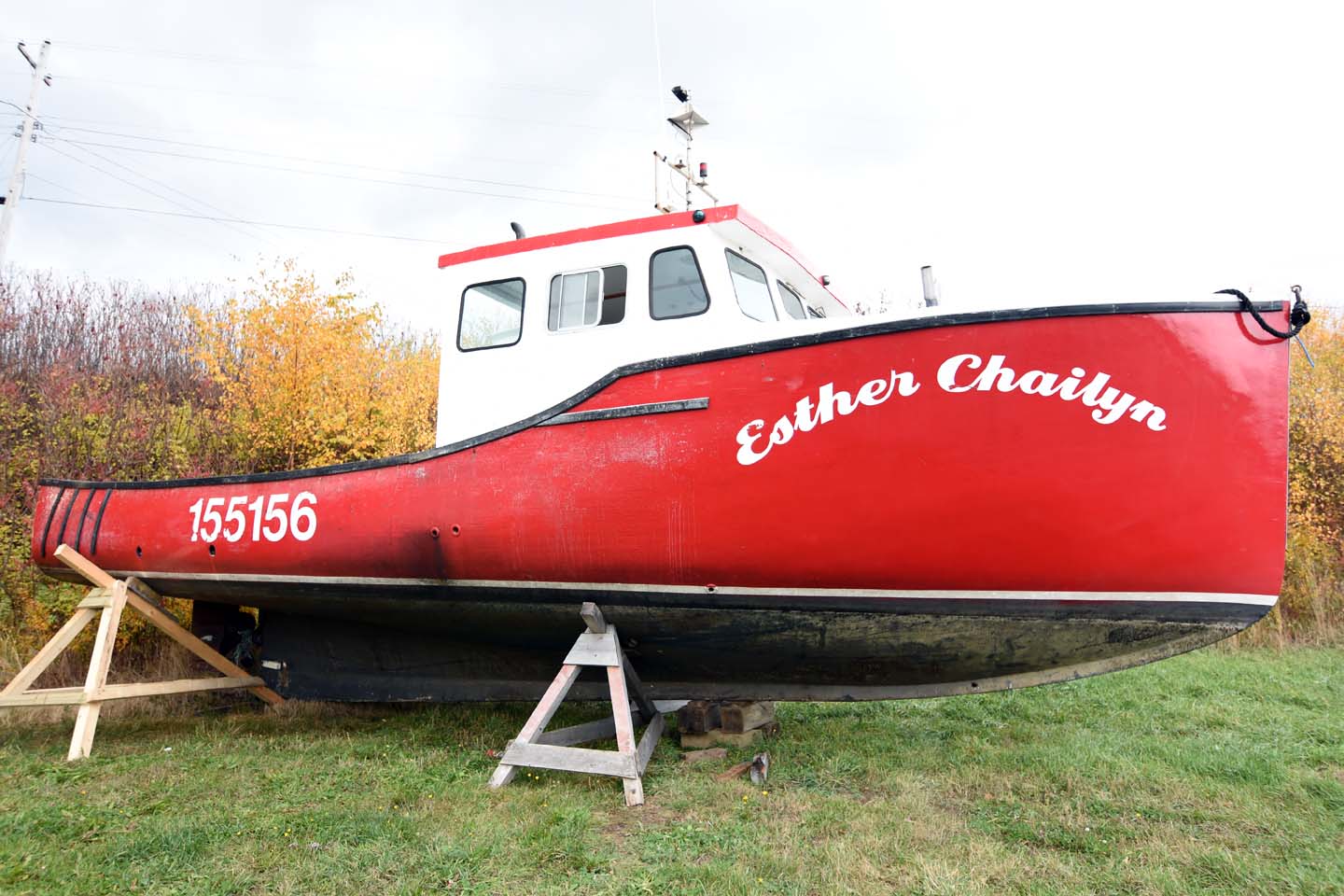 And boats that haven’t seen the water in a long, long time… 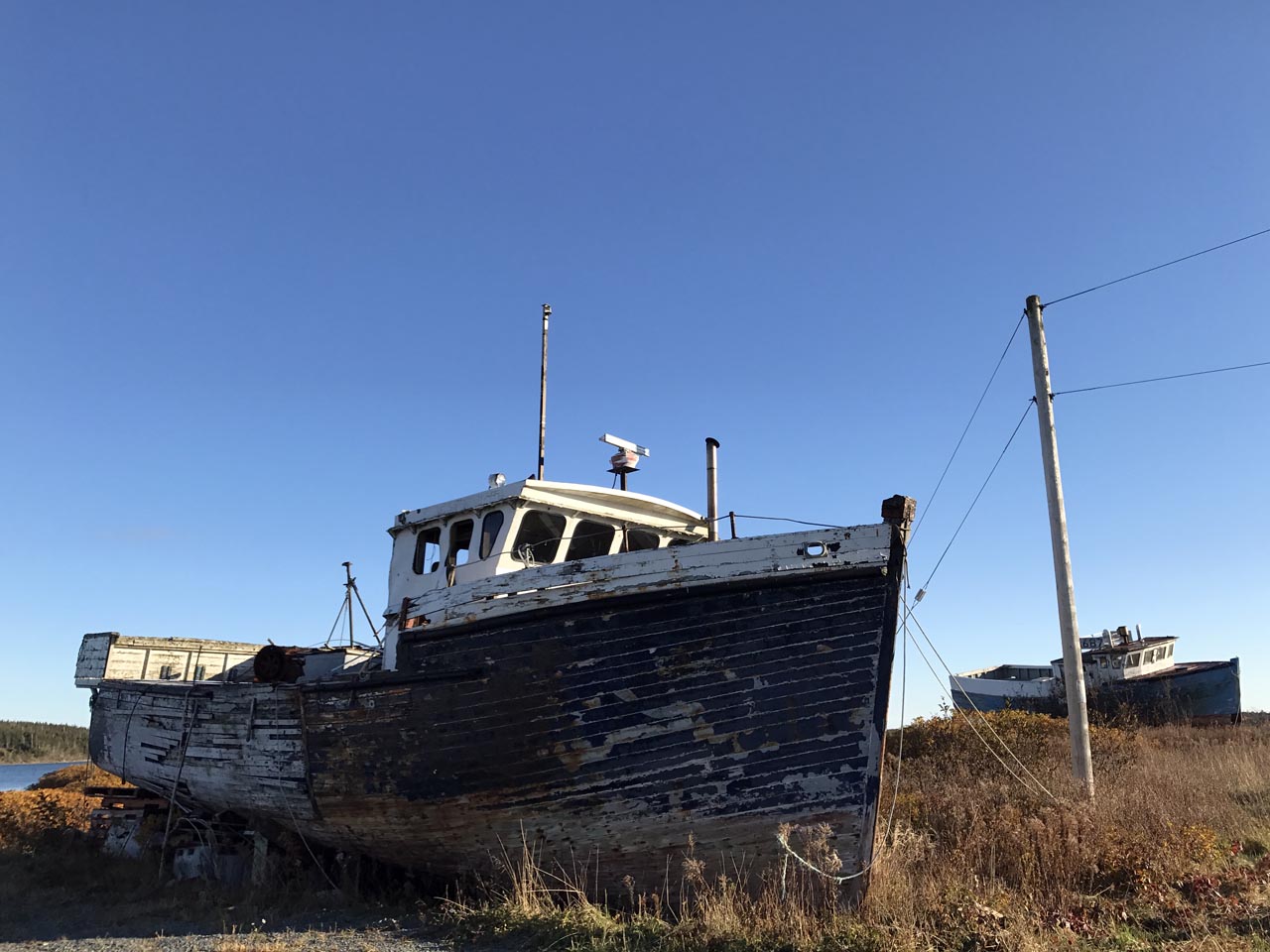 In addition to boats, there was also quite a bit of booze…

Nova Scotia has a “Good Cheer Trail” – a trail of 49 different wineries, distilleries, breweries, and/or cideries across the province. Not bad for a place with just under a million people total!

You can get a Good Cheer Trail passport at vendors throughout the province, and as you receive stamps for each establishment you frequent, you get various prizes. 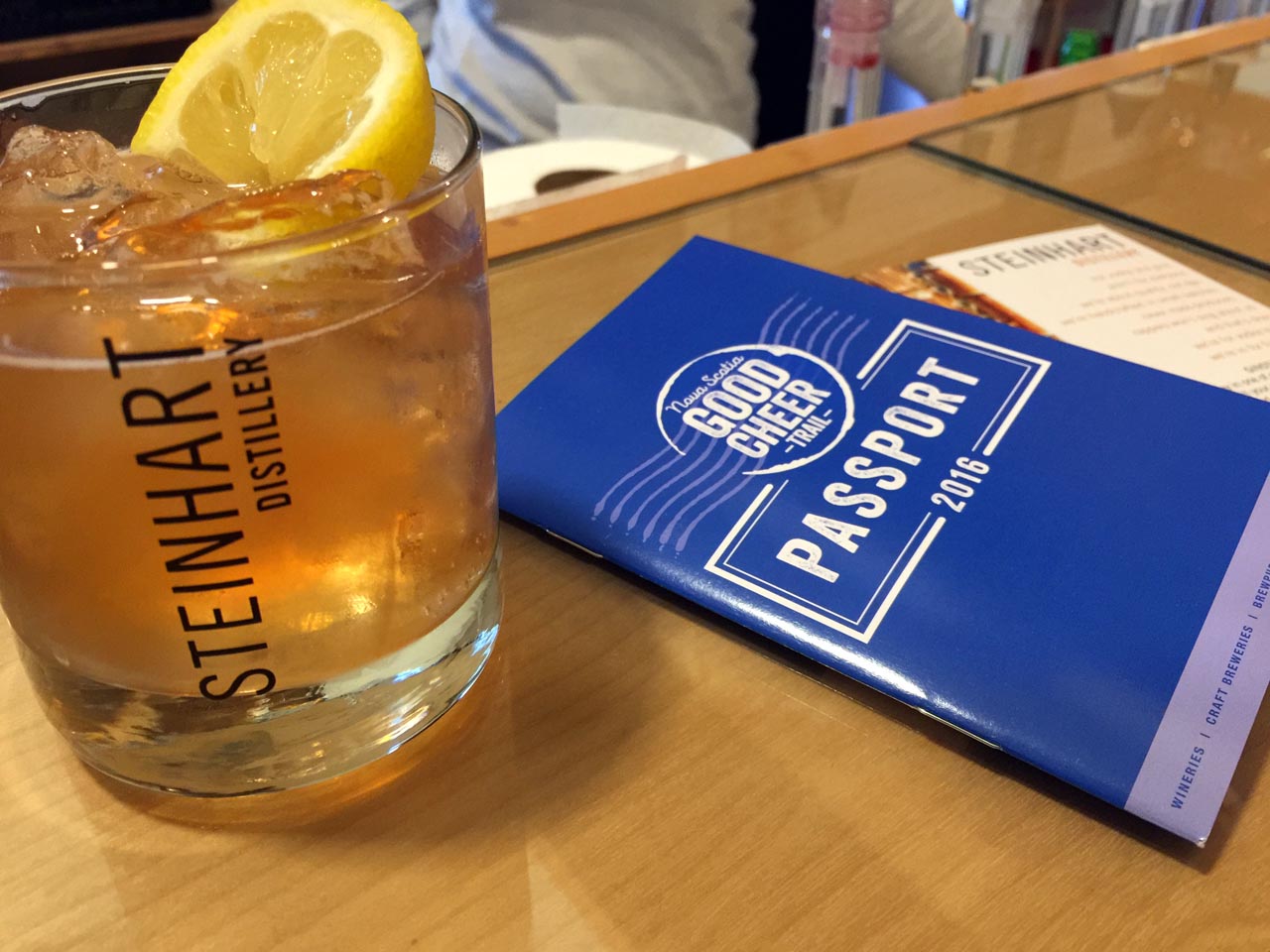 Unfortunately for us, some of the distilleries were closed (like Glenora in Cape Breton) and the prizes ended on 31 October. But that didn’t stop us from enjoying some good cheer!

The Steinhart Distillery, a mere 10 minute drive away from our VRBO, opened in 2015 and makes gin and vodka, of which several have already won awards… 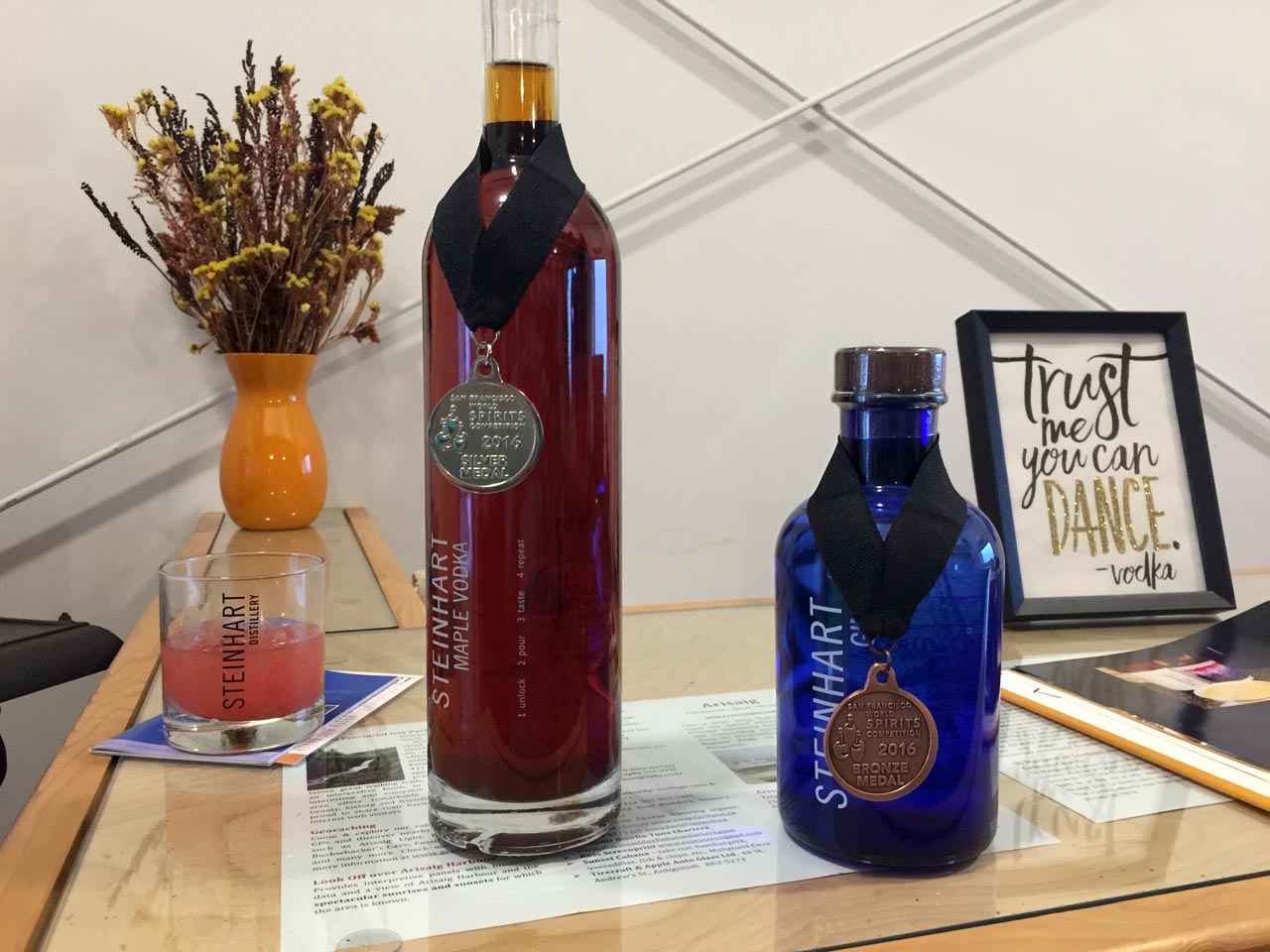 They offer flavors such as maple, habanero, strawberry, and haskap (a local berry) vodkas… 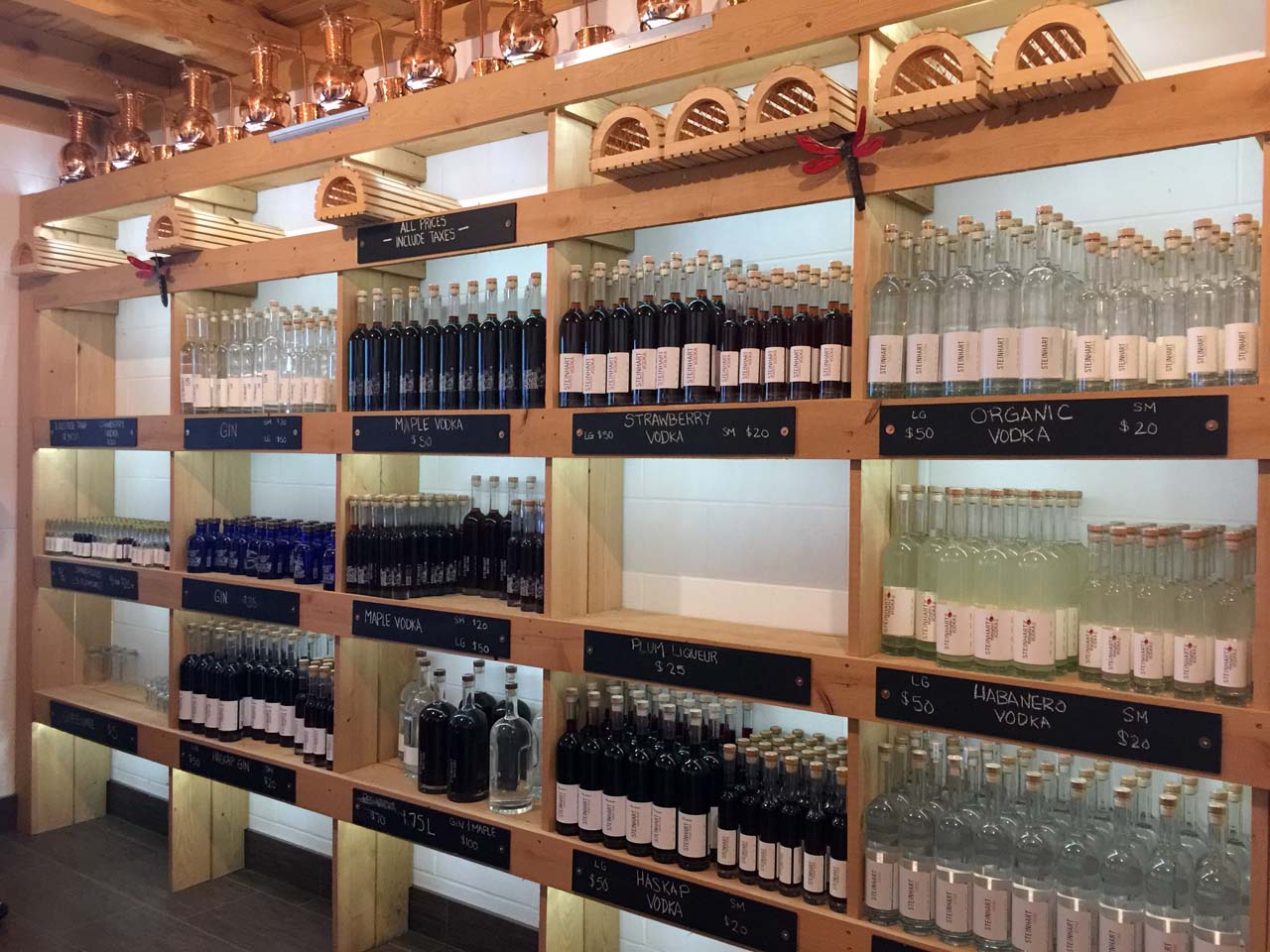 We enjoyed one rainy afternoon here talking to the two girls who were manning the shop. Topics ranged from moose sightings (ours!), to how different Antigonish is from Toronto (where one of the girls was from), the rise in local distilleries in Nova Scotia, and, of course, that pesky US election.

On another day, we drove the Eastern Shore in Guysborough and ended up at the Authentic Seacoast Brewery, home of Rare Bird drafts… 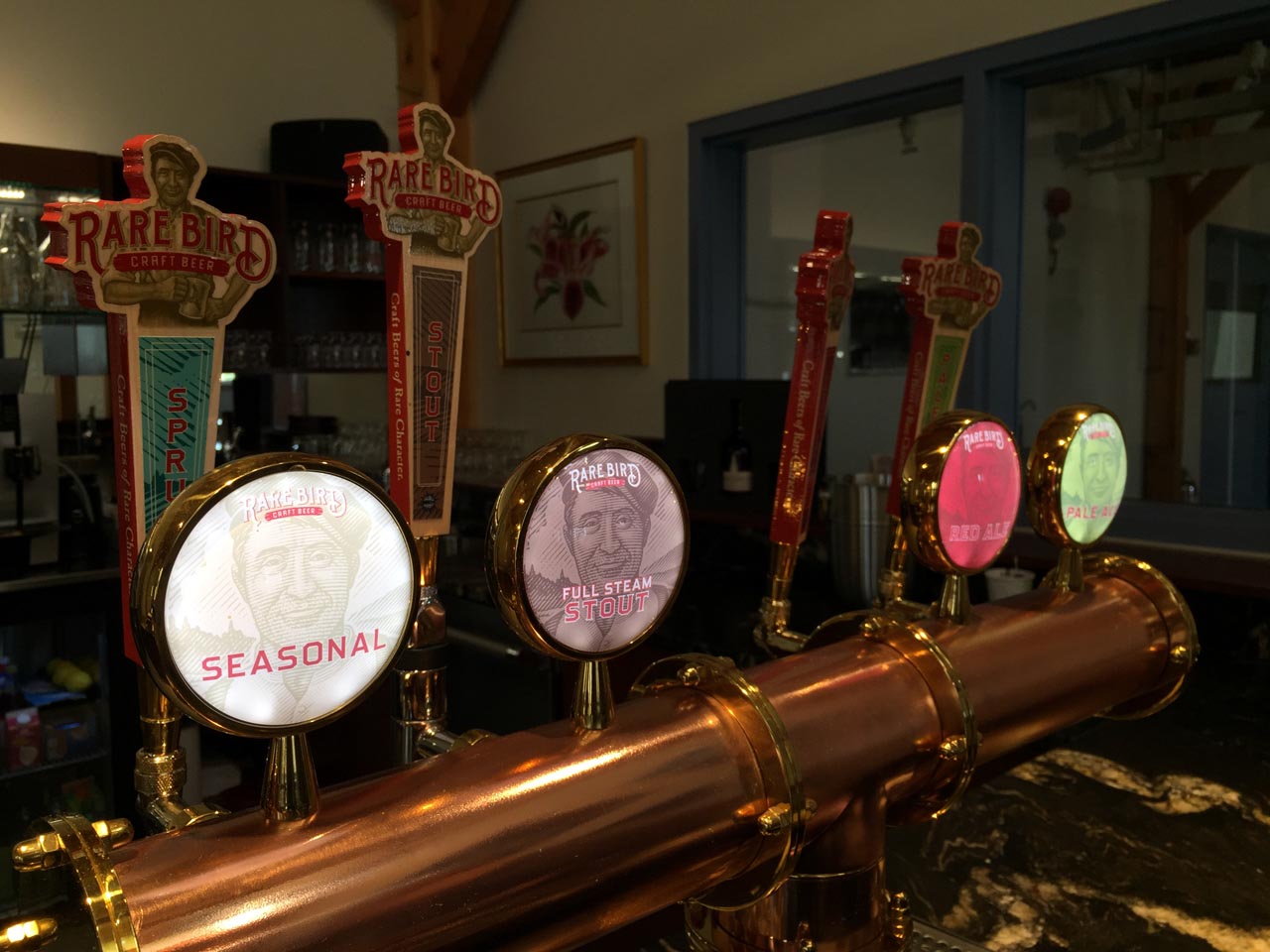 which came complete with the full bottling operation as well… 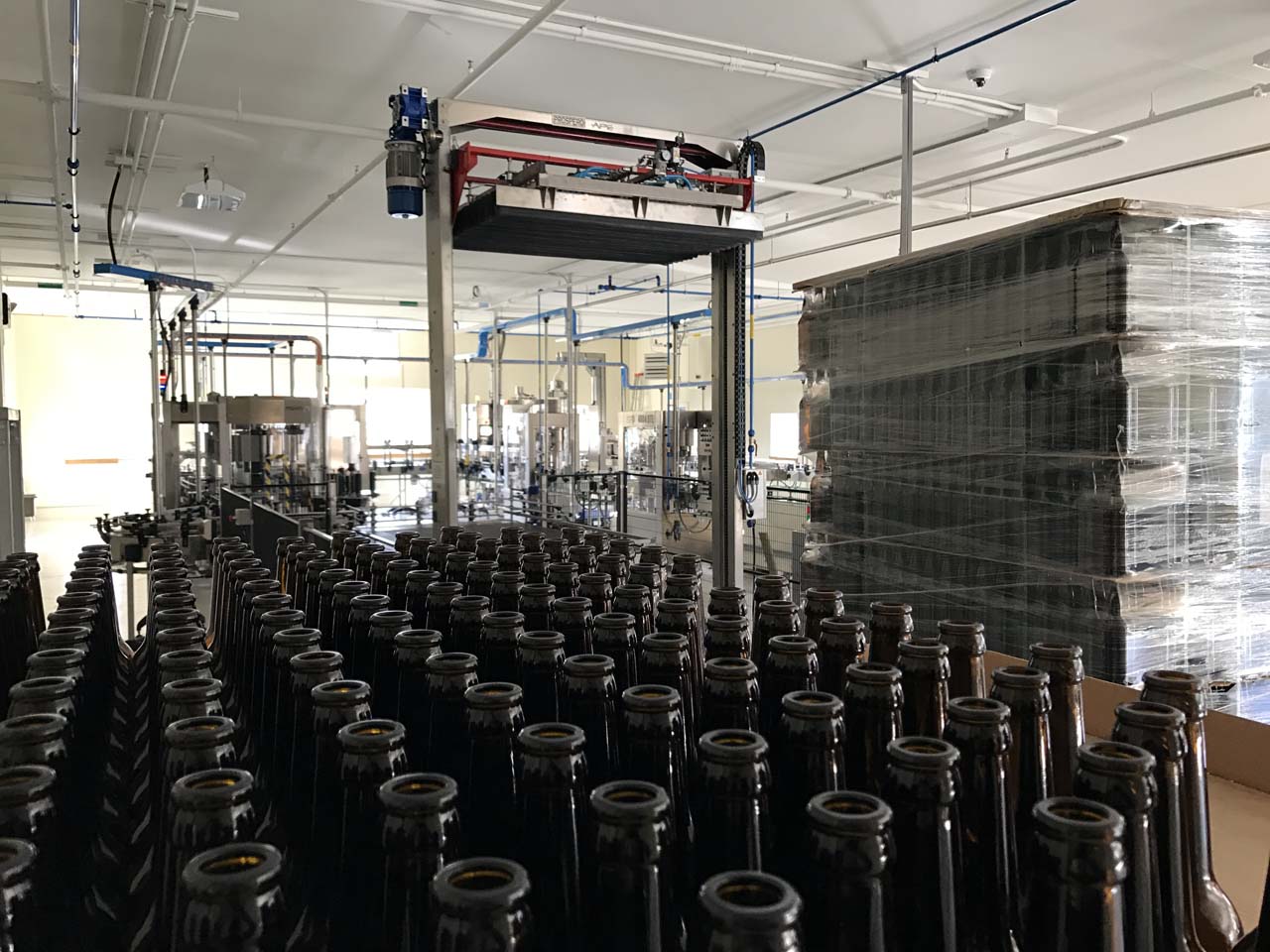 and it also had a Distillery! 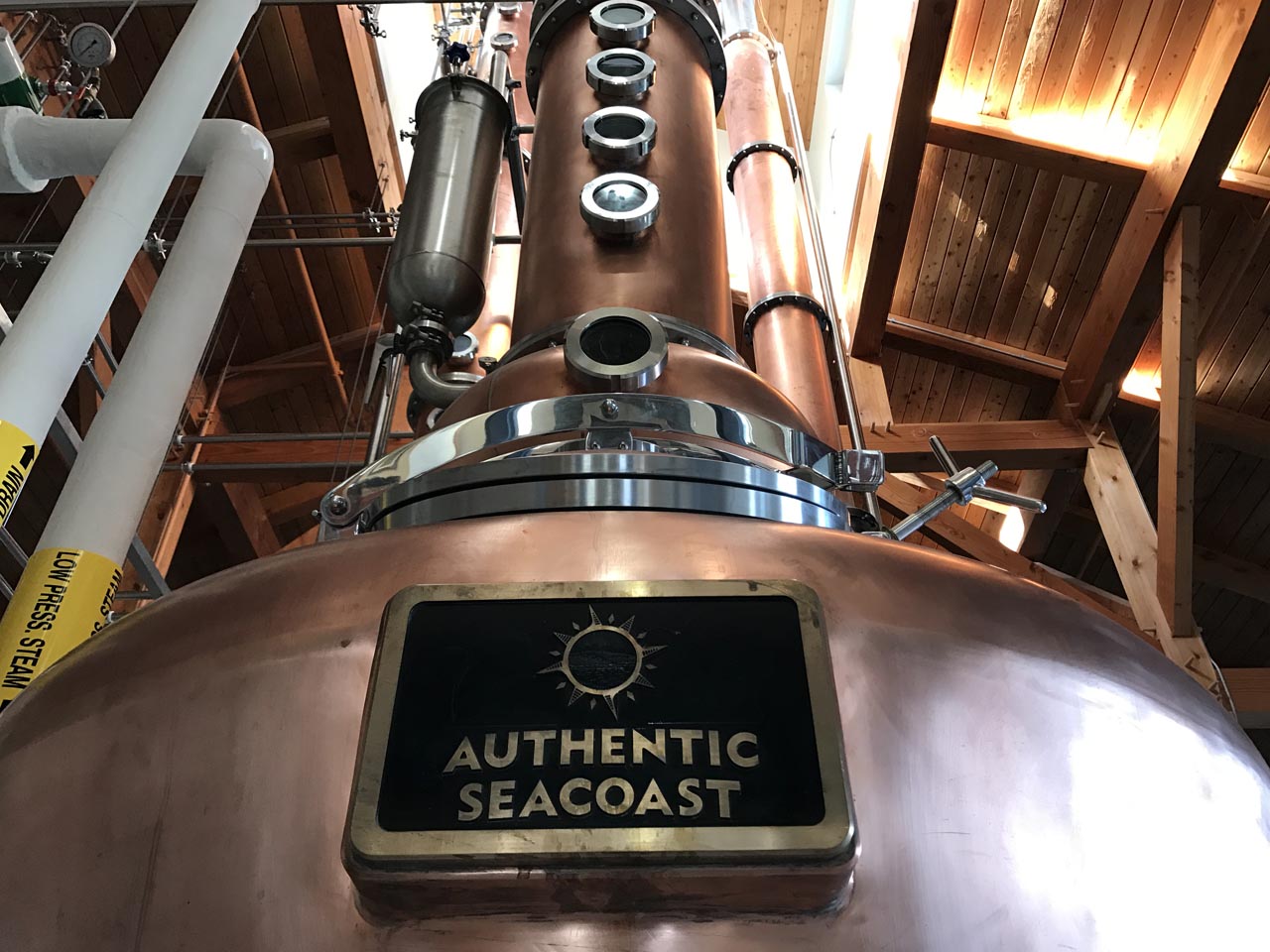 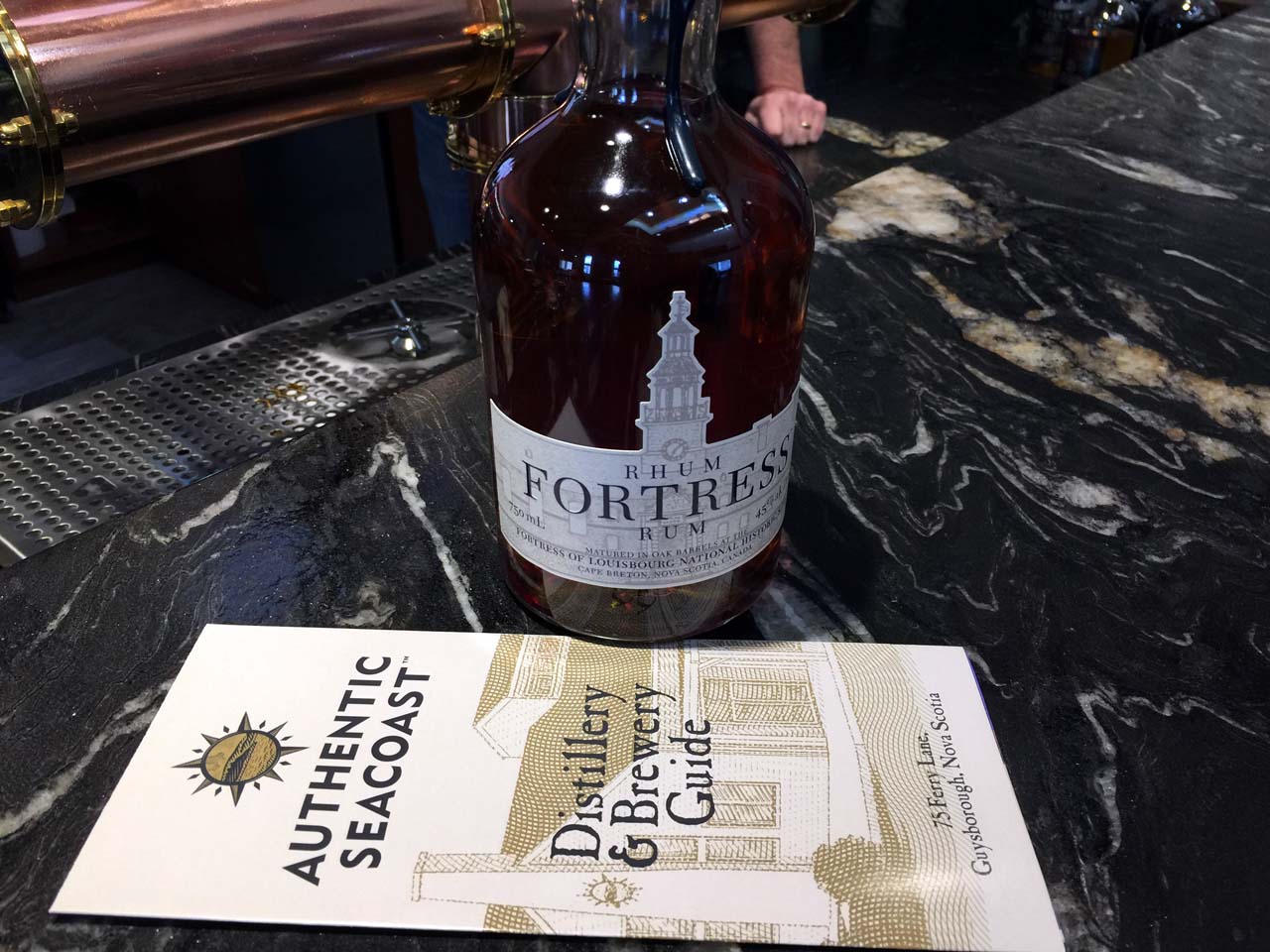 As you’d expect during the off season, we were the only 2 people visiting at the time. They were very kind and gave us a free personal tour of the brewery and distillery, while also telling us about the history of Nova Scotia. Very cool!

I was impressed by the number and quality of the breweries and distilleries in such a small country. These are clearly artisans with a passion for making their libation of choice, all of whom prided themselves on using local ingredients and selling to local markets.

Now, that’s enough about booze, let’s go on to lighthouses.

You guys know I’m obsessed with lighthouses. Love them! Boy am I lucky that Jeff likes them too…(it makes his life so much easier!) We were lucky that there were 2 lighthouses near us, each within 15 minutes driving distance of our VRBO.

We visited the Cape George Lighthouse on our very first day…that’s Jeffrey and I sitting on the bench to the left. It was on this first day that we started the tradition of “lunching at lighthouses.” We had packed a picnic and enjoyed our lunch at this lovely site… 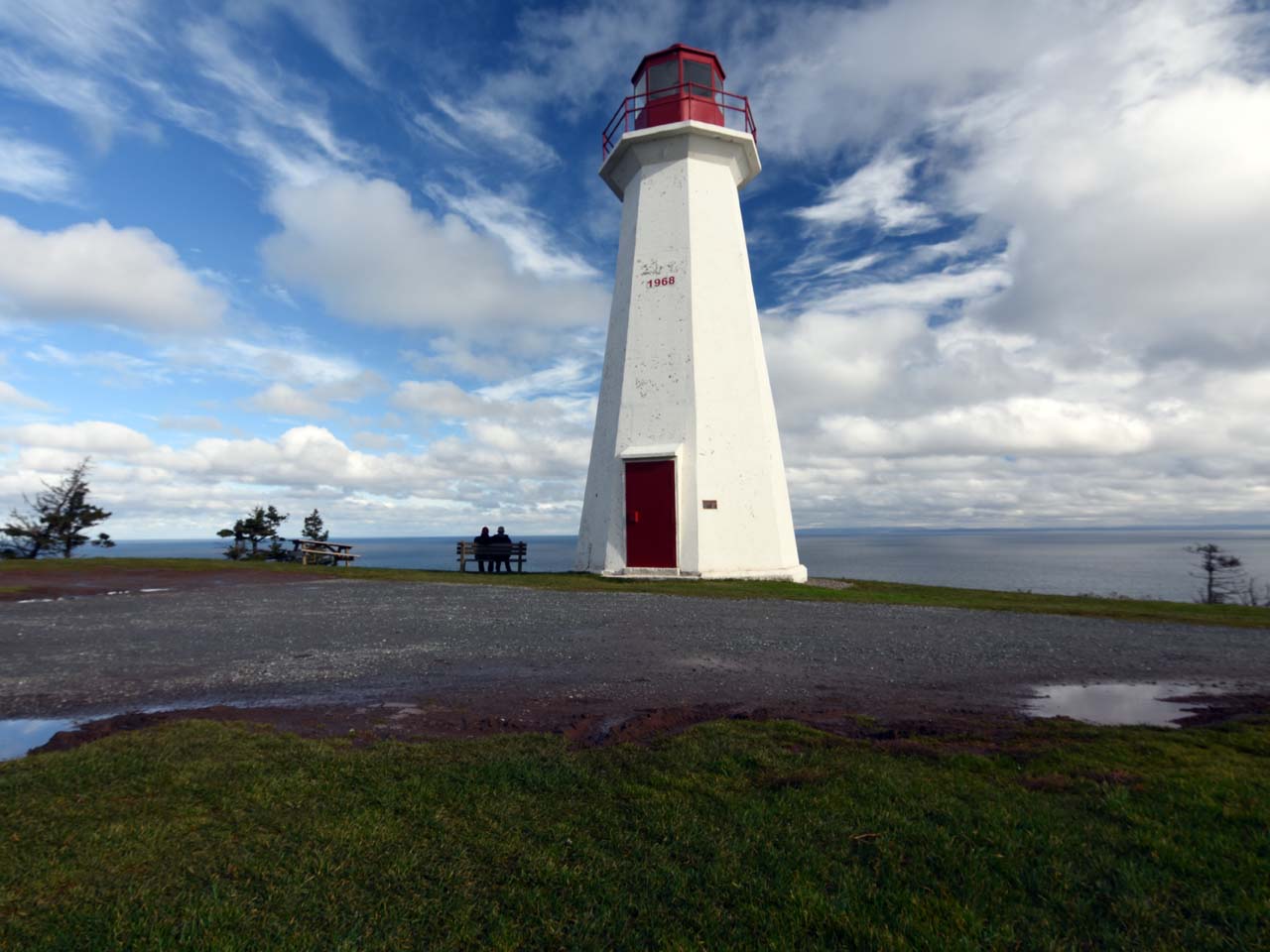 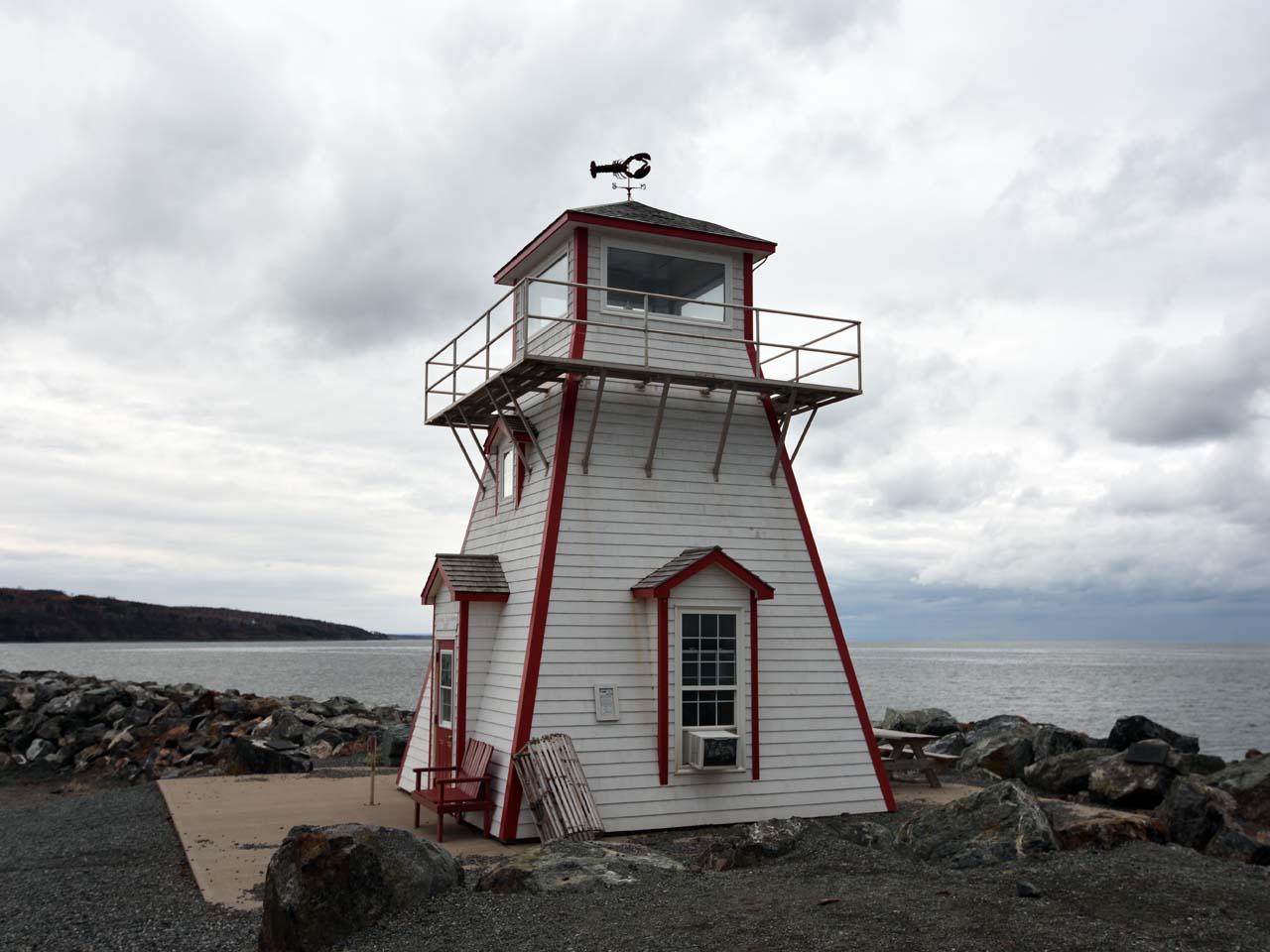 Further afield from our VRBO, on the Eastern Shore, I fell in love with the Port Bickerton lighthouse, below. To me, this one was the most quaint and rivaled some of the best we saw in Maine. 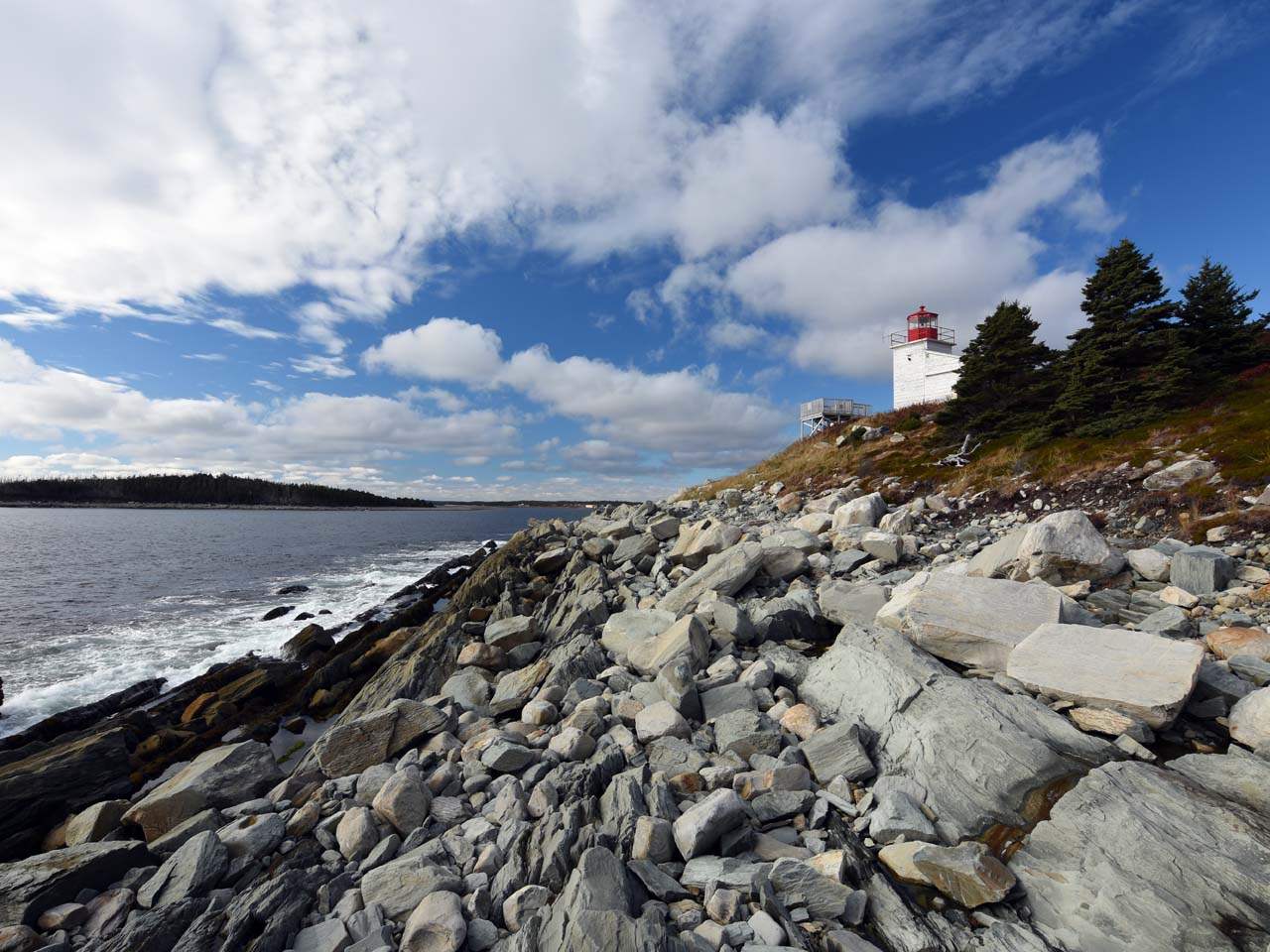 It also had a lighthouse museum next to it (which was closed of course), but together, the two were adorable. 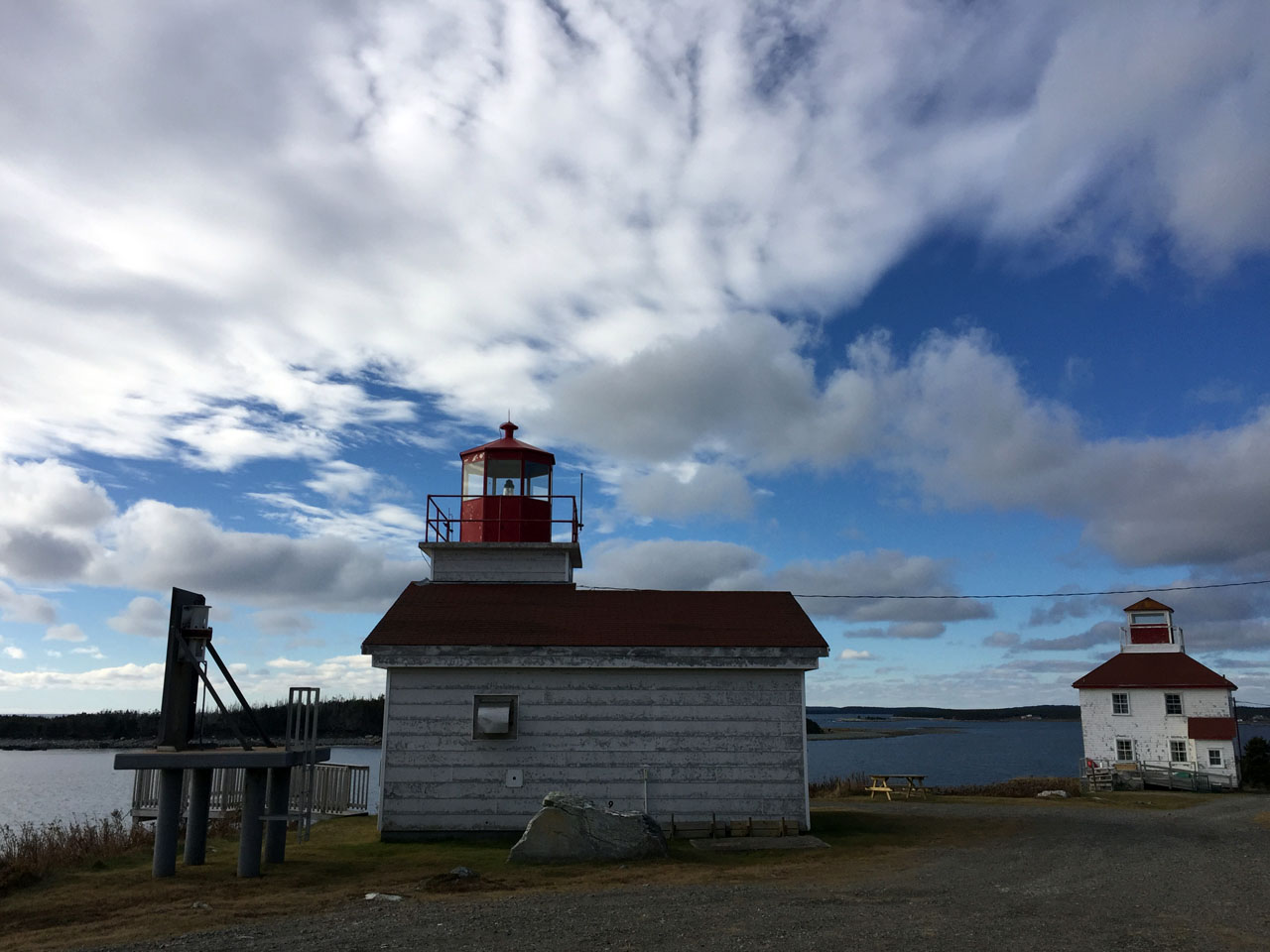 I have no doubt that Jeff and I will rent a lighthouse on one of our future vacations! I’d love to think we could own one, but I imagine the reality wouldn’t quite live up to the dreamlike status I would give it! But boy are those things special.

There is one last thing that Nova Scotia seemed a bit obsessed with, and that is reliving history. Seriously, they seem to have a lot of different attractions that relive various times in Nova Scotian history. Below, Sherbrooke Village is a recreation of life in the 1860’s. It was closed (thankfully) so we just drove through. But when open, people are in period garb, reliving history (think Colonial Williamsburg). 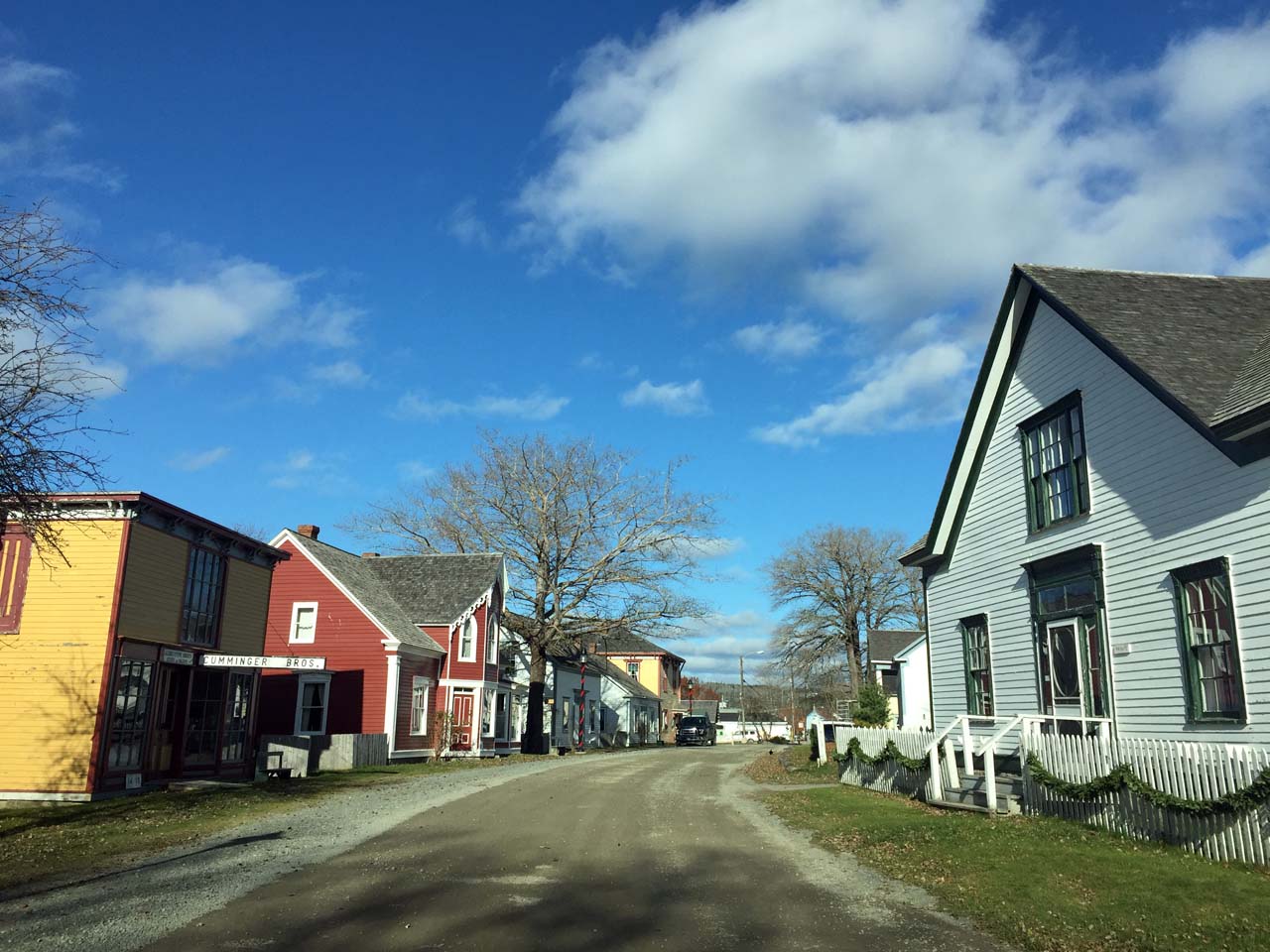 That really isn’t our thing, but something notable did happen in Sherbrooke…

And that was that we found the one place in town that was open, so we ducked our heads in. An hour and a half later, we re-appeared after having eaten a delicious homecooked meal and talking to the owner about the meaning of life. (No kidding.) Beanie’s Bistro is his retirement plan, after a career in music.

He and his wife run the bistro, 6 days a week, breakfast and lunch only, 9 months a year. For the other 3 months (winter, of course!), they travel. This year they are going to Spain.

Yes, yes, yes! I want this. How do I get this???? This couple clearly had their priorities straight, as they were working to live, rather than the opposite. Good on ’em! 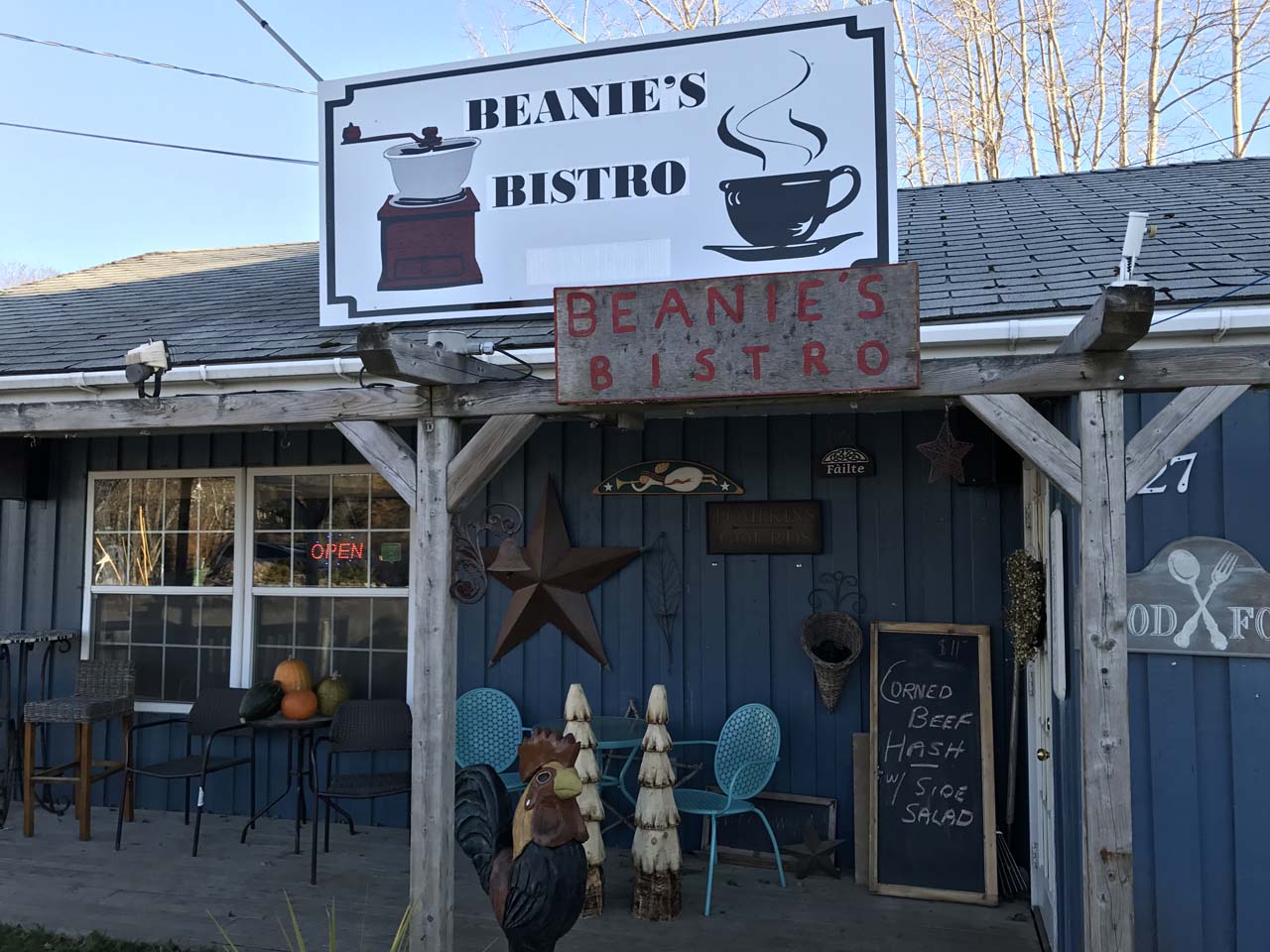 Overall, we thoroughly enjoyed our time in Antigonish and the surrounding areas. It was clearly a slower pace of life and we were 100% on board with that. Later in our trip, we went to the capital and most populous city, Halifax, where one of our waitresses questioned why we went to “Antigo-nowhere.” So that gave us the insight on how city folk might feel about that area.

We, being country mice rather than city mice, loved the simplicity of it as well as the beauty, and most of all, the really wonderful people. Everyone we talked to was kind, considerate, interested, and engaging. Naturally, the 2016 presidential election was the topic of many conversations (sadly) but as always, it was interesting to hear others views.

Well, that’s all for now. We’ll tell you about the big city and other musings in our next post. Stay tuned!

Posted under North America,Photos and tagged with Canada
Comments (0)